Fielding alumnus Dr. Bart Buechner credits the Fielding Veterans Connections group, and the Fielding Graduate University Press monograph, as inspirations for a newly released journal edition that highlights collaborative with, about, and for emerging scholars with connections to the military and veterans communities. Bart served as co-editor of the project, which spanned three years. 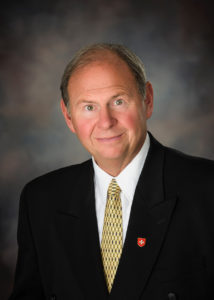 According to Dr. Buechner, “Working with Dr. Jean-Pierre Isbouts and Dr. Miguel Guilarte on Monograph 8, Veteran and Family Reintegration, showed what might be possible for accessing this often-overlooked constituency, and also revealed a potential market for applying such first-person research to generate awareness and potential for beneficial social change.” Subsequent collaborations through the Fielding concentration in Somatics, Phenomenology, and Communicative Leadership (SPCL) also offered models for interdisciplinary research, which were useful in creating an overarching framework to unite the wide-ranging studies. As noted in this monograph, there is also a longstanding connection at Fielding with veterans’ issues, and several founders and early leaders of Fielding, including Hallock Hoffman and Jack Muldoon, were World War II veterans.

The spark for the special edition came when Dr. Buechner met Dr. Karl Hamner of the University of Alabama at a conference of “America’s Warrior Partnership” in Atlanta, in 2018.  Dr. Hamner was in the process of designing a study of the rising rate of suicide among military veterans, beginning with a hypothesis that unsuccessful social reintegration after leaving the service was being largely overlooked as a likely root cause of the problem. “In our first conversation, Karl expressed his concern that there was very little first-person research being made accessible by research universities and academic journals that captured the authentic essence of military and veterans’ lived experience.” Dr. Buechner said.  “I asked him if he would be interested in doing something about that, and he agreed.”

As anticipated, the search for prospective authors was something of a challenge, given the wide distribution of student veterans and the desire to not limit the aperture too much, in terms of research methodologies and topics.  In this area, Dr. Buechner’s connections with student veteran-serving organizations made during his dissertation study of mentorship of veterans in transition were helpful. Using channels such as the Student Veterans of America (SVA) and the National Association of Student Program Administrators (NASPA) were used to augment the more traditional sources, such as the International Society for Traumatic Stress Studies (ISTSS) and the American Psychological Association’s Division 19 (Military Psychology). Dr. Buechner noted that “We did find that there was some work being published that included input by veterans and their families, but given the constraints of institutional funding, it was mostly empirical in nature and did not offer much in the way of insight into the way military and veterans were experiencing their transitions, nor complex phenomena beyond the scope of combat trauma.” These broader topics bridge into interdisciplinary connections between psychology and sociology, communication, and other academic disciplines, including the phenomenon of moral injury, which is not limited to purely psychological origins. As Dr. Buechner explains it, “The notion that every issue being faced by veterans and their families is related to combat trauma, and that only narrow range of evidenced-based cognitive therapies is applicable, is fundamentally challenged by what we are hearing directly from these folks.”

Dr. Buechner and members of the JCES editorial team will also be presenting several workshops, including a panel session titled “Well-Being, Community Engagement and Military/Veteran Scholarship—Deepening the Conversation and Expanding Participation” at the Biennial International Conference of the Inter-University Seminar on Armed Forces and Society  October 15-17, 2021 in Reston, Virginia.