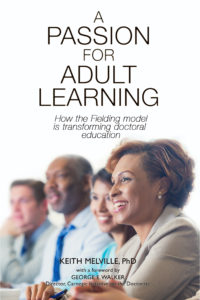 Fielding announces the first book published by the Fielding University Press: A Passion for Adult Learning: How the Fielding Model is Transforming Doctoral Education, by longtime HOD faculty member Keith Melville. Focused on Fielding’s founding generation, the book is described by former board chair Michael Goldstein as “a vivid and engaging chronicle.”

When Fielding started in 1974, it was a radically innovative program. Ten years later, it was the nation’s first low-residency doctoral program to be fully accredited. This book traces the evolution of the program’s principles and practices over four decades, and examines the ways in which Fielding’s learning model has been a catalyst for innovative approaches adopted in many other schools.

“When Fielding celebrated its 40th anniversary a few years ago,” says Fielding President Katrina Rogers, “it was clear that institutional memories are short, even—as in Fielding’s case—when they were founded fairly recently. Caught up in day-to-day tasks, it is easy for administrators and faculty alike to lose track of who the founders were and what they set out to do. It was clear that it would be valuable to revisit Fielding’s first generation and trace the program’s evolution, a project which longtime Fielding faculty member Keith Melville agreed to write. Our intention with this book project is to reflect on Fielding’s past in order to anticipate our path into this institution’s next generation.”

A Passion for Adult Learning is both a chronicle that recalls how this institution has evolved and an analysis of the ways in which Fielding’s innovative learning model has influenced other graduate programs. Alan Guskin, president emeritus of Antioch University, praises the book as a “well written and insightful case study that takes us on a journey into the thinking and values of the institute’s visionary founders. While the Fielding program is relatively small, it has had a large impact on graduate education.”

As he pages through the newly published book, Keith Melville reflects on what he hoped to accomplish by writing it. “We should be proud of our institutional legacy as a pioneer, whose founders set out to create a radical alternative to mainstream graduate education,” he says. “What happened during the founding generation is a great story, filled with colorful personalities. It’s a David-and-Goliath story of what happens when a radically new institution seeks to be accepted by a tradition-bound accreditation process, and then years later provides a clear example of what Clayton Christensen calls ‘disruptive innovation.’”

As George E. Walker, who recently served as director of the Carnegie Initiative on the Doctorate, comments in his foreword, “At a time when many educators are rethinking doctoral education for the 21st century, this volume is an important contribution to the future of graduate education.”

See excerpts from the book and reviewers’ comments about it on Amazon.com.