The Life and Legacy of Cicely Tyson

Home » The Life and Legacy of Cicely Tyson
By Support|Published On: February 23rd, 2021|Categories: Black Student Association, School of Psychology|

Cicely Tyson (1924-2021), acclaimed as one of the most poised and influential figures in the Black community, had an illustrious film career is marked by the reinvention of black representation in the media. It is no wonder that Tyson was discovered by a photographer and became a fashion model before her career as an iconic TV and film actress. During an era when Black women were bombarded continuously with Eurocentric aesthetic measures, Tyson stepped into Ebony magazine, embracing her racial identity through her choice of hairstyles. Later, she garnered much success in her profound TV roles. In 1963, Cicely was the only African American regular cast member in East Side/West Side: a show reputable for addressing social issues. Tyson singlehandedly changed the face of what it meant to be worthy of wealth and love for many Black women. For more information about Cicely’s personal life and career, visit the following link: https://www.nytimes.com/2021/01/28/obituaries/cicely-tyson-dead.html.

Tyson refused to accept roles that degraded Black women in the media. Although her catalog is filled with triumphant victories, one might still argue the historical adage: “Black people have to work twice as hard to be half as good.” Tyson mastered her craft and remained active in the film and TV industry until her death at age 96. She received an Honorary Oscar when she was 94-years-old–45 years after her nomination for “Sounder” in 1973. In one of her interviews following this event, she stated that she could not “afford the luxury of simply being an actress” due to “issues that needed to be addressed.” Her perspective speaks volumes to the notion that one Black person in the room (or on the cast) has to carry the weight of representing all Black people.

In her work, Tyson repeatedly broke barriers for dark-skinned Black women across the lifespan. She was in her forties when she began receiving recognition for her work. As a point of comparison, Katharine Hepburn, one of her contemporaries, worked in the film industry and retired after 66 years in 1994. Hepburn has since been revered as the epitome of class and grace. During this time, Tyson was still acting. Her acting career spans 75 years. In recent years, she assumed a divine, matriarchal persona that left a lasting impression on and off the screen. In that, some of her later roles portrayed stereotypical “mammy” characters.

The Black community rests in the notion of having given her the flowers she deserved while she was here. She never had to convince us that she was proud to be Black; instead, Cicely Tyson portrayed her pride through meaningful character choices, cultural style of dress, and her other-worldly presence. Cicely Tyson’s fulfilling life propelled the inclusion of Black women in dominant American society. 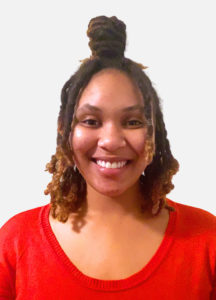 Brianna Jones-Downey is a first-year Clinical Psychology doctoral student and the Secretary for the Black Student Association (BSA) at Fielding Graduate University. She is a double graduate of North Carolina Central University, earning her bachelor’s and master’s degrees in psychology. During her graduate tenure, Brianna’s research interests included contextual factors and learning for Black students and the psychosocial impact of pain in adults living with Sickle Cell Disease (SCD). She has used these interests to gain vast research experience by presenting at psychological and educational conferences across the country, penning and editing publications, and publishing Chapter 24 on African American Health in the Handbook of Health Psychology.