The Fragility of Social Media Fame

What Goes Up, Can Come Crashing Down.

Many successful people will tell you that fame is illusory at best.  That doesn’t make wealth, privilege and adoration look less fun from the outside. Social media fame is particularly alluring when we hear stories of ‘overnight’ success and the economics of monetizing millions of followers based on personality, chutzpah, and the ability to attract attention are the critical talents, not years of studying Method Acting or busking on street corners.  Fame can come quickly as memes spread and followers, like moths to a flame, go with what burns brightest.  Celebrity has its perks, but it also can undermine values and encourage bad behavior, especially when fame is accompanied by a lack of (or lag in) accountability. Audacity, however, is only as sustainable as the last outrageous prank and, ultimately, can’t offset bad behavior.  The cost is immediate, as we see with the mass exodus of sponsors from David Dobrik’s social channels over accusations of sexual misconduct against one of Dobrik’s Vlog Squad members. 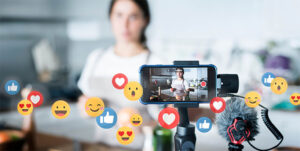 Social media fame is more fragile and less likely to be endure compared to the celebrity of actors and musicians.  It may seem like some traditional performers became famous “overnight,” but almost all worked for many years cultivating their craft and building a resume, hoping for a break-out moment.  While traditional celebrity certainly takes advantage of social media for fan engagement, social media fame is different.  It has created a new class of celebrity–Influencers–that takes advantage of network connectivity, peer-to-peer communication and bandwagon behaviors so information and influence spread faster. This works well for fame based on the ability to attract attention through zealous extroversion, appeal, and a willingness to push the envelope rather than traditional performance skills.

While some Influencers are able to monetize their fame at the peak, there is no long-term security in a skillset that is reliant on fans searching for the next new thing.  This means that social media fame relies more on the fans’ sense of connection to the Influencer rather than the Influencers talent and skill.  Success is defined by the fans’ attachment for the Influencer and the psychological pay-off they get from the sense of affiliation and fan identity. The perception of a relationship, albeit one-sided is what Horton & Wohl (1956) defined as a parasocial relationship. This sense of connection is enhanced by production techniques that emphasize ‘realness’ and authenticity, unscripted spontaneity, breaking the fourth wall (speaking directly to the camera lens), and encouraging interactivity through comments and sharing.  The illusion of personal connection if further amplified by content designed to activate emotions—humor, anxiety, or disgust.  It doesn’t matter as long as there is some emotional reaction to the content that makes it more memorable, sharable, and, dare I say, meaningful.

When an actor gives a bad performance, fans may be disappointed, but they do not feel personally rejected or offended.  By contrast, social media fame is a much more personal relationship. Fans relate to the Influencer as if they knew them and are more likely to feel disappointed, disrespected, or rejected by Influencers behaving badly or violating social norms that their fans endorse. Fans are also more likely to be drawn into Influencer drama and follow the crowd when tides turn.  There’s no social capital in being a fan of a has-been or social outcast.

Celebrity can be stressful and even disorienting (Turner, 2014).  For Influencers, there is no difference between their public and private selves.  While they may be playing a “role” in their minds, they are not in the eyes of the audience.  Fans are more reactive than ever right now, thanks to the strain and anxiety from COVID.  Social isolation makes Influencer relationships more impactful and suffering disappointment over them more intensely felt.

In the US, we love to put celebrities up on pedestals as if they were ‘above it all.’ When they misbehave, as most do when they believe in their own superiority, we take great relish pulling them back down to earth to show them and us that they’re not so special after all.  It makes us feel better about ourselves.

This is a tough time to tumble down from the heights.  Between the social hypersensitivity to social justice issues and the knee-jerk tendency to ‘cancel’ people based on the behavior or word of others (often without nuance or regard to facts), there is a perfect storm for a crash and burn event like Dobrik’s that few Influencers can withstand.  Brands are subject to the same consumer whims that drive fan behavior but, unlike celebrities who can sometimes benefit from bad press, brands don’t have that luxury.  They will jump ship at the first sign of any serious social transgressions.  For Influencers basking in sudden fame and wealth, the trajectory down from those dizzying and lucrative heights can be equally steep.

About the Author: WebAdmin2