‘From Fake News to Free Thought’ 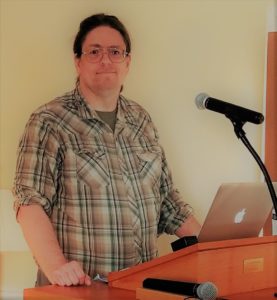 Inspired by what he was learning in his Media Psychology studies at Fielding, student Patrick McNabb recently taught a five-week course introducing the subject to curious locals in his hometown of Chestertown, MD.

Entitled “From Fake News to Free Thought: The New Science of Media Psychology – What it is and Why It’s Relevant to You” and taught through The Washington College Academy of Lifelong Learning, the public course attracted mostly retired adults who wanted to better understand the tools of the media.

“A lot of them seemed to be quite fearful of modern media and computer technology, particularly social media and ‘fake news,’” McNabb said, “and I endeavored to present a balanced, optimistic view.”

Incorporating some of what he already knew from studying and working in theater, broadcasting, business communications, and copywriting, McNabb said most of their discussions stemmed from what he’s learned at Fielding.

“I had never even heard of media psychology until I found Fielding and began my education here,” he said. “Fielding has such a central role in media psychology and its future, given that it was the very first university in the world to offer a doctorate in the subject. That’s something I’m very proud of. And after studying it for seven years, I know a lot of the trailblazers. In fact I referenced many of my professors in the class.”

“The students seemed to enjoy the overview I gave them and my knowledge of the topic,” he said. “Several even gave me books or academic journals to review.”

The students got him thinking, too. “One of the more interesting questions I got was whether media psychologists have to adhere to a code of ethics, like medical professionals do. It was a very good question,” he said. “The Nazis skillfully used media for nefarious, controlling purposes, basically practicing media psychology in an evil way long before the term ‘media psychology’ was invented.”