Coaching from an Indigenous Worldview Perspective

Home » Coaching from an Indigenous Worldview Perspective
By Terry Hildebrandt|Published On: May 28th, 2020|Categories: Evidence Based Coaching|

Considering Indigenous Worldview as Part of Your Coaching Work

The wiki entry for “coaching” is quite thorough. It refers many applications in which someone who has particular skills in communication, motivation, and education for a particular area of interest can assist someone in achieving a desired goal in that area. As thorough as the wiki may be, however, it does not mention anything about tapping into unconscious drivers of behavior. It briefly mentions sports psychology, for example, but it does mention use of “hypnosis and self-hypnosis” (which I refer to as “trance-based learning,” a natural phenomenon humans and other animals have employed for thousands of years). Most world-class athletes employ the hypnotic phenomenon in one way or the other to achieve their success. Also missing and closely related to natural unconscious approaches to learning (for better or worse), is worldview reflection. Whatever barriers may exist to helping a person achieve their highest potentiality is likely to relate to foundational understandings about how to exist in the world.

Although most people understand worldview as being about any number of beliefs, from religious or cultural ones to philosophic or ideological ones, a growing number of scholars are returning to Robert Redfield’s idea that there are only two worldviews. Redfield, considered to be the father of social anthropology, wrote that the great variety of cultures and fundamental beliefs that people have fit under the umbrella of either what he referred to as the “primitive” worldview or the “cosmopolitan” worldview. I prefer to call these the Indigenous worldview and the dominant worldview. Individuals or societies that generally believe in the worldview manifestations listed on the left side of the chart below essentially live under the dominant worldview as opposed to those who live according to the beliefs in the right column under Indigenous assumptions about the world.

I offer the CAT-FAWN mnemonic as a strategic tool for coaches to use to help bring both hypnosis and worldview into the picture in ways to help clients in any field of endeavor that may be compromised by the dominant worldview. Although I and others have written about this extensively in books and articles, I give this brief overview of how it works. CAT, standing for “Concentration-Activated Transformation” is the trance-based ability of the mind’s imaginative capability to program beliefs into our unconscious minds. FAWN represents four main “forces” that largely determine the source of the hypnosis and how it can lead to positive or negative consequences depending on which worldview defines it.  Thus a coach and client dealing with a problematic could reflect on the ways deep assumptions relating to “Fear-Authority-Words-Nature (FAWN) are playing out in the situation at an unconscious level (CAT). Studying the chart offers insight into the significantly different ways these four concepts guide us under one worldview or the other. 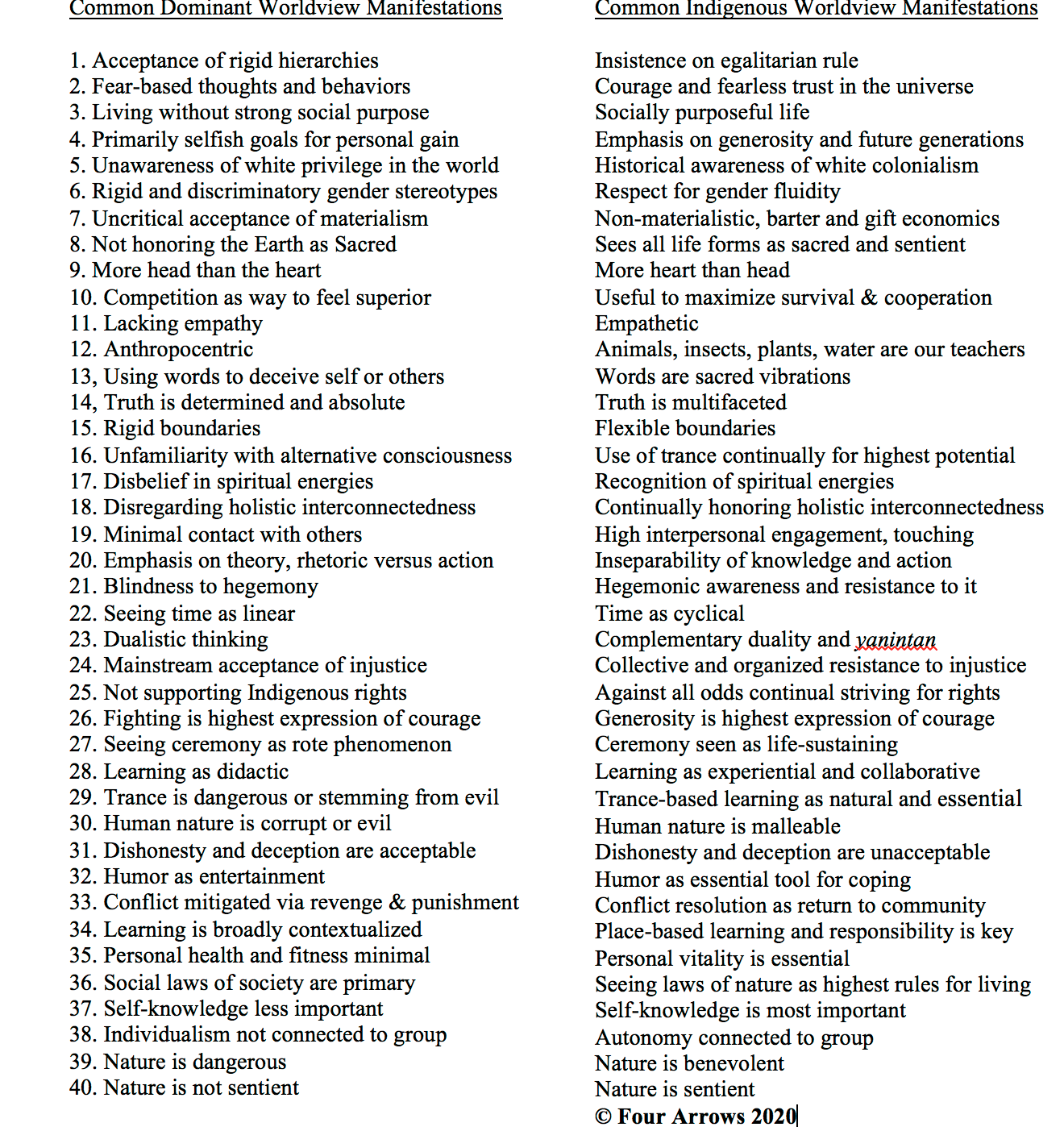 Four Arrows work reminds how traditional Indigenous worldview precepts bring forth ways of living and working in harmony that represent the highest goals of coaching. For most of human history, they have proven effective for maintaining collaborative responsibilities and individual autonomy in behalf of healthy communities. Learning ways of being from the natural environment, the Indigenous worldview intrinsically moves people to seek complementarity in apparent opposites, resulting in relatively peaceful, sustainable living. It tends to cultivate genuine cooperation and great respect for all diverse life forms. Based on the famous social anthropologist Robert Redfield’s notion that there are only two worldviews, the dominant one and the Indigenous one, this presentation shows how complementary and contrasting worldview reflection and trance-based learning can create the kind of transformation necessary for human survival and thriving.

Four Arrows, aka Don Jacobs, PhD, EdD, is a professor at Fielding Graduate University. He was previously Dean of Education at Oglala Lakota College and prior to that taught hypnosis at U.C. Berkeley. A former sport psychologist, he recently helped Nathalie Moelhausen become Brazil’s first woman world fencing champion. Selected as one of 27 “Visionaries in Education” by AERO, he has authored 21 acclaimed books on Indigenous Worldview and is the subject of a text by  Dr. Michael Fisher entitled Fearless Engagement of Four Arrows. Vandanna Shiva offered the back-cover blurb for his newest book The Red Road: Linking Diversity and Inclusion Initiatives to Indigenous Worldview (2020). He lives in Jalisco, Mexico with his artist wife and pets where he paddle-board surfs. https://www.fourarrowsbooks.com