It is no surprise that those in the Fielding community know me only as the president of this university, a longtime educator, an advocate of environmental justice, and as a mentor to graduate students. But the title I have held the longest is also the most endearing to me. It is military spouse. Could you look at me and know that I am married to a retired Army Major? Probably not, but I have been for 32 incredible years.

Ret. Army Maj. Bill Cherry, my courageous husband, friend, and hero, is the reason this Veterans Day is more personal than ever. 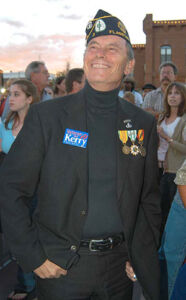 Today, if he could, Bill would tell you that joining the Army in 1961 was his duty, the right thing to do — and the surest path for a poor kid from a small town in Arizona to earn a college degree if he returned home alive from Vietnam. Without hesitation, Bill did three tours of duty in Vietnam and 25 years of service across the country, West Germany, and South Korea, before he retired. With the GI Bill, he attended the University of Arizona and Northern Arizona University. It is where we met as graduate students; Bill studied political science, and I studied history. We were both accepted into the Arizona Honors Academy, a six-week summer program that taught us about national security. It was also where Bill and I fell in love.

At the end of that summer, I was bound for Germany and the University of Tübingen, where I would spend the next two years as a student Fulbright Scholar. During the time that Bill and I were apart, letters helped to fill the gulf. It was very much a Victorian kind of romance. I still remember the thin blue airmail envelopes that carried those letters from our hearts and between two continents. All those cherished letters survived, and so did we. Bill and I got married after I completed my Fulbright and returned to Arizona. And Bill became a university professor — not bad for an inquisitive and conscientious young man who grew up thinking that higher education and all of benefits that came with degree attainment were out of reach.

If he could, on this Veterans Day, Bill would tell you that he valiantly fought to protect this country’s hard-won freedoms. And he would share that in a kind of pivot, he chose to help heal the wounds of wars as a co-founder of the Veterans for Peace chapter in Arizona. Bill would also tell that serving as the commander of the American Legion post was a point of pride. But, he can’t.

These days, I am Bill’s voice, the military spouse narrating his remarkable, yet simple story of service and striving, learning, and scholarship — and commitment to all that he loved. Increasingly, Bill has been unable to speak. Vanishing, too, are many of his motor skills, and his ability to think and reason are in decline. As a consequence of being exposed to Agent Orange during the Vietnam War, Bill developed Lewy body dementia, the second most common type of progressive dementia after Alzheimer’s disease, and suffers from Parkinson’s disease, a neurodegenerative disorder. In 2017, he began to exhibit symptoms and two years later was diagnosed.

I was recently able to share with Bill some good news that I hope will also benefit our Fielding U.S. veterans and their families. The much-anticipated Promise to Address Comprehensive Toxins Act of 2022, or PACT Act, was passed in August to significantly expand VA health care and benefits for veterans exposed to Agent Orange, burn pits, and other environmental toxins during their time in service.

As I pay tribute today to Bill the Army veteran, I also celebrate the unlikely but tenacious   older student and scholar he became. His story is one that many in our Fielding community share. Bill was in his 40s when he decided to pursue a doctoral degree that would equip him with the tools to explore and frame the ideas and important questions that he said long intrigued him about the ways that people learned.

Bill’s path to doctoral education is one among many that can lead lifelong learners like you back to school. Perhaps it was to earn a new credential, for the questions they want to answer, the research they want to conduct, or to gain the skills to practice and teach. Fielding veterans, active-duty service members, and military spouses like me, we see you in our global community. And on this Veterans Day, we salute you, we honor your service and sacrifice — and we support the journey you are now on at Fielding.

About the Author: Katrina Rogers

Katrina S. Rogers, PhD, is President of Fielding Graduate University in Santa Barbara, CA, a distinguished graduate school known for adult learners in the fields of clinical psychology, human talent and development, organizational leadership, and education. In the course of her career, she has served the international non-governmental and educational sectors in many roles, including executive, board member, and teacher. She led the European campus for Thunderbird School of Global Management in Geneva, Switzerland for a decade, working with international organizations such as the Red Cross, World Trade Organization, United Nations Development Program, and the European Union. She also developed externships for students at several companies, including Renault, Nestle, and EuroDisney (now Disneyland Paris). She has doctorates in political science and history. In addition to many articles and books focused on organizational leadership in sustainability, Rogers serves on the Boards of the Toda Institute for Global Policy & Peace Research and the Public Dialogue Consortium. She received a Presidential postdoctoral fellowship from the Humboldt Foundation and was a Fulbright scholar to Germany where she taught environmental politics and history. She is currently studying environmental values among leaders that have responsibility for improving sustainability practices in their organizations. These are leaders from the corporate, governmental, and nonprofit sectors. The purpose is to understand how people’s worldviews are brought to bear on the actualization of sustainability work.