Join us for Honoring Our Veterans on Nov. 10

The Fielding community is invited to the Honoring Our Veterans virtual event, sponsored by the Office of Diversity, Equity, and Inclusion, on Thursday, Nov. 10 at 4 p.m.-5 p.m. PST/7 p.m.-8 p.m. EST.

This event will celebrate and reflect upon the many contributions of those individuals who have served — and continue to serve — our nation through military service. Four members of the Fielding veterans community will share their own experiences in the military. They will address what is needed to not only support military members, but, most importantly, how we can create environments in which military service people and their families thrive and flourish.

A recording will be available on Fielding’s YouTube after the event if you are unable to attend live. Speaker bios are forthcoming. 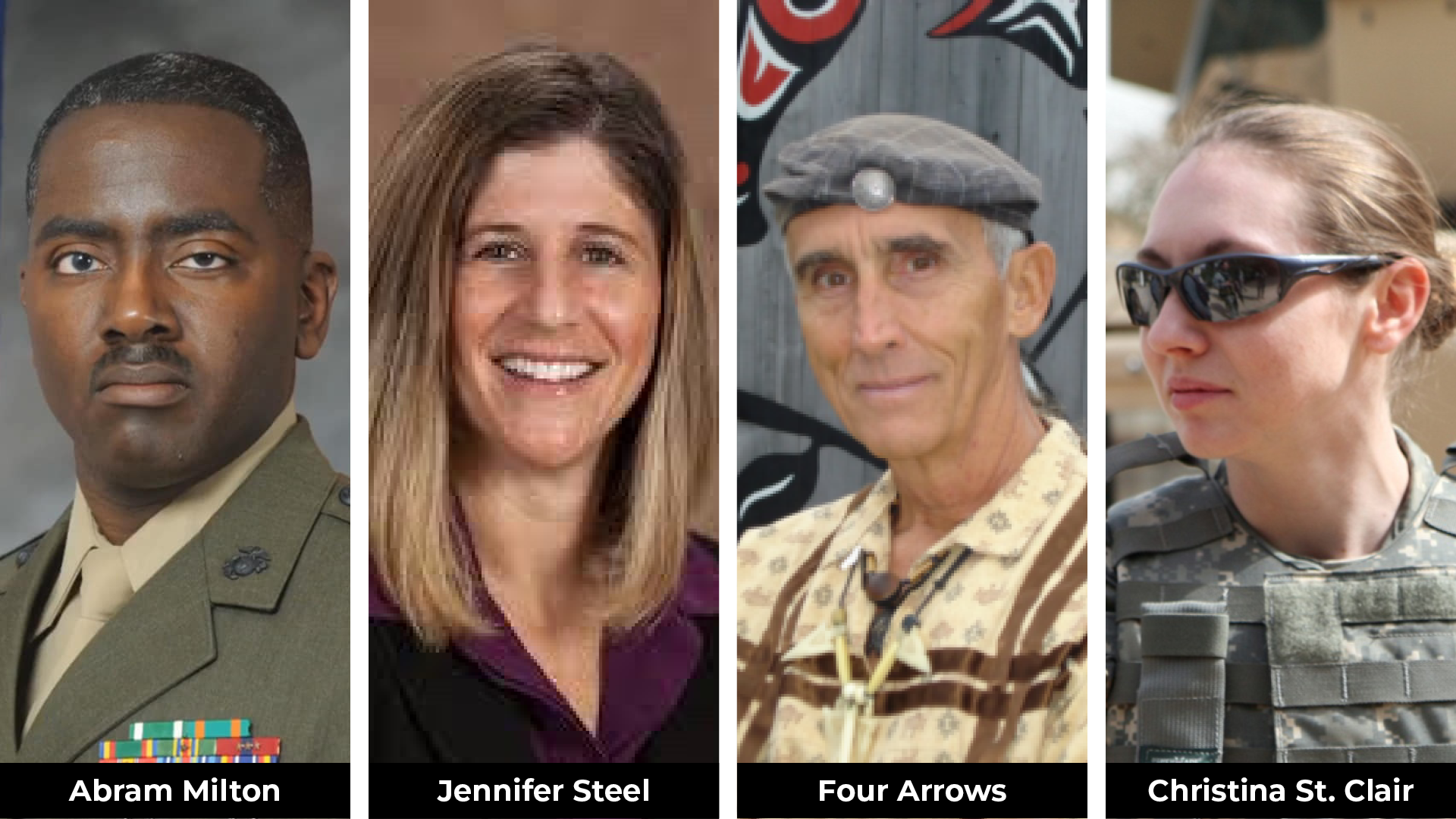 Dr. Jennifer Steel is a licensed clinical psychologist with the Department of the Air Force, Office of Special Investigations (OSI), Behavioral Sciences Directorate and currently a reserve special agent with the OSI. Prior to joining OSI Behavioral Sciences, she specialized in her clinical capacity working with juveniles in the justice system conducting forensic evaluations and providing reports and consultation to the courts. In addition, Dr. Steel specialized in treating military and law enforcement personnel suffering from PTSD as a result of combat experience, military sexual trauma, and child abuse. She has published research in books and peer reviewed journal articles and is currently proposing the first serial sex offender research study within the Department of Defense. In her current capacity with OSI Behavioral Sciences, Dr. Steel provides operational support and consultation to the OSI training academy and throughout the command specializing in investigative interviewing and sex crimes. She has collaborated with international research/practitioner teams to train law enforcement personnel on investigative interviewing at the local, state, national, and international level and has been selected to present at several major conferences. She has been an agent with the OSI for 22 years, serving on active duty for 8 years as an undercover narcotics agent, forensic sciences consultant, detachment/squadron commander and currently in her reserve capacity as the IMA to the vice commander of OSI’s 2nd Field Investigations Region (ACC). As the IMA to the Vice Commander, Lt Colonel Steel leads a 22 member wing level staff responsible for command and control of OSI’s largest wing, including 1 squadron, 17 global detachments, and 10 operating locations. She is responsible for ensuring global criminal and counterintelligence support to ACC, AFCENT, and AFSOUTH, administering a 116 million dollar budget. Her responsibility extends to executing operations in high threat deployed locations in CENTCOM and SOUTHCOM while providing worldwide support to combatant commands/air component/CCs in CENTCOM, SOUTHCOM, STRATCOM, and NORTHCOM.

Four Arrows, aka Don Jacobs, has been a full-time professor at Fielding for 20 years, formerly Director of Education at Oglala Lakota College and a tenured Associate Professor at NAU. He is co-founder of Chapter 108 in Flagstaff of a Veterans for Peace chapter and is currently working with VFP on a project to Indigenize/decolonize its practice even more than it already is. He is the author of 23 books and many other publications on restoring our original, proven sustainable Indigenous Worldview. He is a recipient of a Martin Springer Institute on Holocaust Studies Moral Courage Award for his activism.

Christina St. Clair is a third year Clinical Psychology Ph.D. student, with a concentration in Neuropsychology. She also holds a Bachelor of Science degree in Psychology from Virginia Commonwealth University and a Master of Arts degree in Forensic Psychology from the University of North Dakota. Prior to her acceptance at Fielding, from 2001 to 2011, she served ten years as a Military Intelligence Officer in the U.S. Army Reserves with deployments to Afghanistan, Iraq, and West Africa.