What To Do When Your Friend Behaves Badly Online?

Home » What To Do When Your Friend Behaves Badly Online?
By Pam Rutledge|Published On: September 25th, 2021|Categories: Media Psychology, Pam Rutledge, School of Psychology|

What To Do When Your Friend Behaves Badly Online? 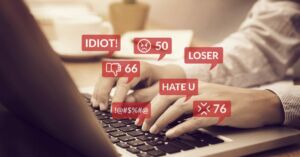 We see a lot of behaviors online.  Everybody has their own ideas about normal, but we sometimes see people we know posting online in ways that seem totally off.  It is troublesome when it’s someone we know and care about. Do we look the other way or are we not being a good friend by ignoring it?  How do we distinguish between socially inappropriate and someone in mental distress?

Mental distress is complex.  Behavior changes can be triggered by a range of things—many of which are situational and will pass, but others can make a mark.  A year of living with COVID, in social isolation and fear is taking its toll.  There is no single signal to watch for and no easy answer, especially when you’re making a judgment about how someone by observing online behavior.

Resist the Urge to Diagnose

When you see a friend behaving in a way you find troubling, however, remember that your job as a friend it to reach out and offer support, not supply a diagnosis.  Diagnoses should only be given after an assessment by a qualified professional.  It’s tempting to be an arm-chair psychologist, but don’t offer up your diagnostic interpretation of someone’s online behavior.  When friends diagnose, they are not showing empathy and support, they are labeling.  Labeling can actually be disabling.  It shifts the focus away from the behavior—which is the issue–and can be internalized and be limiting or, worse, self-fulfilling.  Since mental illness is sometimes seen as a personal weakness or shortcoming rather than what it is—a physical illness—suggesting a diagnosis could also cause your friend to shut down, pull away or act defensively.

There are, however, some warning signs that would warrant reaching out and checking in.  Offline, these include a change from usual behaviors, such as becoming more irritable, the deterioration of the quality of things like work or assignments, increased interpersonal conflict, and noticeable dark and negative remarks and moods.   Emotional dysregulation online might include becoming disrespectful and bullying in discussion posts, not responding to emails and texts, or posting content that is increasingly dark and negative.  More concerning changes would include content that is accusatory, manipulative, inappropriate or threatening or indications of disorientation, paranoia or lack of touch with reality.

It’s important to remember that these are changes in behavior, not a behavior in insolation without history or context.  Most online behaviors, however, are seen in isolation raising the risk of misinterpretation.  While it may be tempting to judge inappropriate or out-of-character online behavior as a sign of mental illness, what we’re really doing is evaluating them against what we see as norms of social behavior and our biases and preferences.

Research suggests that the lack of eye contact and sense of anonymity create a disinhibition effect in online environments—loosening the grip of social norms and in some cases increasing negative behaviors, like bullying, as well as self-disclosure.   These can be problematic, but bad judgment is not the same as mental distress.

What we would classify as negative online behaviors often overlap with signals of mental distress, but they may, be more related to personality, inability to self-regulate, feelings of powerlessness or lack of empathy.  The costs of such behavior vary.  When we’re in person, bad behavior can have many repercussions, from ostracization to legal action, however, perceptions of distance and anonymity can lessen the power of social norms by removing the sense of accountability.  People often forget that the remnants of our online behavior last.  They are not invisible and there are many cautionary tales about old social media posts that have destroyed a job prospect or college application.

If you see a friend exhibiting unusual behaviors, reach out “Hey, I saw some posts that’s didn’t sound like you, how are you?”  It is best if you can see them in person or make voice or video contact so you can get other cues.  When people are frustrated or unhappy, they can fall into unproductive behavior patterns.  Just like kids who act to get noticed, outrageous behavior is often rewarded with attention on social media.  Avoid focusing on the content and try to understand your friend’s frame of mind and what triggered the concerning behavior.  If the erratic behavior is a result of being harassed, bullied, or verbally abused, then your support is very valuable.  You can help the target take steps to document the abuse, block the offender and report them to the platform or in the case of physical threat, to the local authorities.

If you are truly concerned for your friend after reaching out, get professional help.  The National Suicide Prevention Hotline can help you find resources that will help. 800-273-8255