Too Stressed to Commit? The Popularity of Half-Hour Shows

Home » Too Stressed to Commit? The Popularity of Half-Hour Shows
By admin|Published On: August 4th, 2020|Categories: COVID-19, Media Psychology, School of Psychology|

You can manage your cognitive resources through program length.

It used to be that sitcoms were 30 minutes and dramas were an hour (including commercial breaks).  However, there has been a trend toward shorter form 20-30 minute dramatic programming.  From a practical perspective, shorter programming allows for a greater breadth of consumption.  It’s pretty clear that the quantity of media choices has grown, but the number of hours in a day has stayed the same.

Yet the avowed enthusiasm for programs that demand a shorter investment of time raises questions about our stress level and the cognitive energy that we can or want to expend on focused attention.  You’d think during a period of sheltering at home and varying degrees of social distancing, the last thing we’d be worried about is the length of a program.  But the stress and anxiety from COVID actually use up our cognitive resources before we ever tune in. 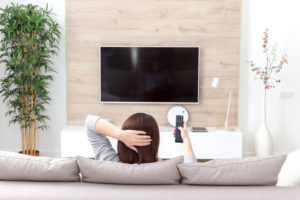 I’ve seen conflicting arguments. Some people arguing that their attention span is totally spent and the thought of a whole hour to watch something seems impossible.  Others are promoting half-hour shows as binge-worthy.  They are compact, travel-size pleasure for the stressed and more readily consumable for multi-episode enthusiasts.  However, even those who can’t imagine an hour may find out they have the energy to keep going and watch a few more episodes of their favorite half-hour shows in one sitting, so, as always in the human brain, there’s a lot more than logic going on here.

The human brain has limited resources.  Thinking makes it tired.  Stress uses energy too, without much to show for it.  Cognitive depletion is just what it sounds like: Running out of cognitive energy  (Vosgerau et al., 2008). The brain is too tired to think, so it picks the easy choice.  Plain potato chips over salt and vinegar chip.  Plain chocolate ice cream over chocolate mint (Hildebrand et al., 2020).  That also argues Friends over Stranger Things or another episode of the same versus finding something new.

Television and streaming are how many of us are filling our evenings and, right now, possibly our days.  Short shows can give us more sense of control.  We have agency, we can exercise choice.  Short programs also increase our perception of agency because they have a natural stopping point.  Since society still views television and movies with moral condescension as if goofing off were a bad thing, half-hour programs have the psychological appeal of building self-esteem by virtue of being short.  (Notice that watching more than one episode of a show is referred to as “bingeing” which is culturally-designated moral failing even if multiple episodes are still less time than an NFL game.)

Time isn’t a magic bullet. If a show has a simplistic plot and engaging characters, it will be more relaxing than one of a similar length with a complex narrative and morally ambiguous characters that can further exhaust our resources. If a short program actually has a complete narrative arc (i.e. the storyline resolves within a single episode), we will feel good from the release of chemical rewards that we experience from the closure of resolution.

The great thing about the rational brain is that it is an expert at rationalizing—telling us why something is okay so we feel better.  So even if we continue to watch another episode or two or three of a single show, we still have the illusion of control precisely because it is episodic, and you could stop at the end of any episode.  Beware, though, that fatigue and stress mean we are less likely to push the off button and more likely to roll into the next episode.

Breaks between shows, however, mean it takes a little more cognitive work to remain immersed in the narrative than it does for a continuous story like a movie.  If we watch three or four shows and the story is still not resolved, we may end up more fatigued than if we watched a movie and reaped the neurological rewards of narrative resolution.  If we watch several hours of the same show out of momentum rather than choice, we may also experience negative emotions and a blow to our self-esteem over the “inability to control” our behavior.

Entertainment experience is a function of the quality of the narrative and the level of emotional engagement, presence and character identification we experience in the storyworld—the psychological world created in our imagination that provides the context, setting and logic for the story.  Worrying about the length of a program is the wrong approach to determine enjoyment.  The perfect length is a combination of the program quality, our emotional state and fatigue level and the salience of the program content and production.

If we’re worried about the amount of time we’re devoting to movies and episodic programming, the best approach is to 1) pay attention (be mindful) of how we’re using our time versus how we would like to use our time and 2) establish a viewing plan ahead of time when we have more cognitive resources.  It’s much easier to stop a show after three episodes if we decided ahead of time that three was our limit because the cost in cognitive energy is less to a prescribed rule than to weigh options, decide and hit the off button.

In general, however, I recommend checking in with our emotions.  Plan ahead or not, that is the best indicator of when we’ve watched enough of something and need to change.