Home » The Psychology of Denial and Rationalization About the Atom Bomb And How it Continues Today
By admin|Published On: August 6th, 2020|Categories: School of Leadership Studies|

In the winter of 1994, I received a call from Carolyn Jourdan. She was the executive director of a documentary featuring discussions between the surviving scientists of the Manhattan Project, entitled Half Lives: Keeping the World’s Biggest Secret. Carolyn told me she had read a book I wrote, and that it represented an important perspective she wanted to have in the film. I asked her what possible connection she saw between The Bum’s Rush: The Selling of Environmental Backlash (Phrases and Fallacies of Rush Limbaugh) and her documentary? She replied that she wanted to have me analyze the rhetoric of the differing viewpoints between the Manhattan Project scientists. She knew there were opposing views about the morality of dropping the bombs on Hiroshima and Nagasaki. She thought some of them would reveal that they held beliefs for reasons I exposed in my book. I accepted the job and had the honor of spending about a week in Hanford Washington with the elderly scientists.

The most important thing to me was the experience of listening to the scientists ponder the question: “If you knew what you know now, would you have participated in making the bomb?” Carolyn’s mission was to give the vilified architects of the modern nuclear age a voice that would illuminate their motivations in developing nuclear weapons. 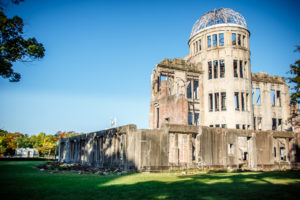 As I think back on this 75th anniversary of the dropping of the bomb on Hiroshima, I can offer this conclusion:

Most people who grow up under the dominant worldview, no matter their backgrounds or intentions, are susceptible to hyper-suggestibility during times of stress.  They tend to hypnotically accept directives of perceived trusted authority figures. Rudyard Kipling was correct when he said that words are mankind’s most powerful drug, but only as it relates to our hierarchical, authoritarian cultures. And only when the phenomenon of trance-based learning is not understood nor self-controlled. For those Indigenous groups who have, against all odds, managed to hold on to our original non-hierarchal worldview that realizes that ceremony, spirituality and social purpose in behalf of all life are essential ways of being in the world.

As I recall, half of the scientists had come through a painful process to conclude what they did was wrong. The other half remained resolute in it being the right thing to do and the only thing to do, in spite of contrary evidence that was provided. Both perspectives seemed to confirm how Rush Limbaugh’s words and those of Fox News broadcasters can create cultish behaviors. Religious orthodoxy has the same effect. Educational and cultural hegemony does as well. It may be even more successful, regardless of political persuasion, because the most powerful hypnosis is indirect, especially during fear or stressful situation.

We are making the same mistakes over and over again and will continue to do so until we realize the precepts in the worldview chart that are listed under our original worldview precepts. Email me (djacobs@fielding.edu) if you want a copy of it or look at it my my new book, The Red Road: Linking Diversity and Inclusion Initiatives to Indigenous Worldview.

Below is an example of how we can move from one “existencescape” to another as a way to regain our balance. 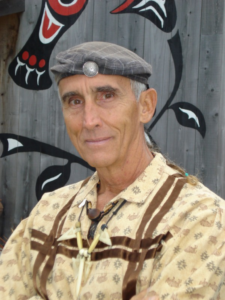 Four Arrows (Wahinkpe Topa) aka Don Trent Jacobs is currently a faculty member in the School of Leadership Studies at Fielding Graduate University. He was previously a tenured Associate Professor at Northern Arizona University, and before that he served as Director of Education at Oglala Lakota College on the Pine Ridge Reservation. He holds a PhD in Health Psychology with an emphasis on employee fitness; and an EdD in Curriculum and Instruction with a cognate in Indigenous worldview. He has authored numerous books, chapters, peer-reviewed papers and journal articles about Indigenous worldview; social/ecological justice; wellness; psycholinguistics; critical theory; teaching and learning; and neurophilosophy. He presents on these topics internationally. He is a CPED Writing Fellow and a Fulbright International Scholar. His text, Teaching Truly: A Curriculum to Indigenize Mainstream Education, was selected as one of twenty progressive education books by the Chicago Wisdom Project in 2017.