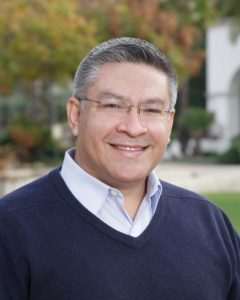 When freshman Congressman Salud Carbajal took office in the nation’s capital last month, he brought many of the skills and perspectives he learned in Organizational Management at Fielding.

“It served me well throughout my many years in county government,” says Carbajal, who served on the Santa Barbara County Board of Supervisors for 12 years before being elected to Congress in November. “Fielding was a great foundation to lean on and draw from—a reservoir of knowledge.”

Born in Mexico, Carbajal immigrated to the U.S. with his family as a child. His father worked as a miner in Arizona, and then a farm worker in Oxnard, Calif. Carbajal attended the University of California, Santa Barbara, as an undergrad, and served in the Marine Corps Reserve for eight years, including active duty service during the Gulf War.

It was Santa Barbara County Supervisor Naomi Schwartz who encouraged him to pursue higher education. He was working as her chief of staff at the time, and Fielding appealed to him for a couple of reasons.

“It had a very progressive mission and teaching style. That was important to me,” he says. “It also took into consideration the schedules of working professionals.”

Once he started, though, what he loved most was the ability to apply what he learned to real-life situations. “We engaged in dialogue and invited people from the community to interact with us and provide insight,” he says. “It was relevant to our daily working environment—very practical, very germane. It allowed us firsthand to understand the theoretical concepts of what we were learning and apply those to different aspects of our job.”

Carbajal was interested in thinking about the county’s role in terms of customer service. “What was it that drove customer service vs. the principles that undermined customer service— in government and from a public policy
standpoint?” he says, and his Fielding studies helped him develop that idea. “It was very helpful. I was able to work on implementing a customer-service framework based on a lot of the things I learned.”

He graduated in 2003—and was elected as County Supervisor the following year. During his years in office, he became known for championing environmental causes, health programs that benefit children and seniors, and school programs that help at-risk kids.

“I’m very well aware that I am a freshman and my party is in the minority,” he says, “but I am not deterred from trying to work with anyone and everyone, my party and the party across the aisle, to try to move legislation forward. I will continue to be a loud voice and an advocate for the residents of the Central Coast that elected me.”

Indeed, he has a long list of issues he hopes to address: economic opportunity for working families, access and affordability for higher education, comprehensive immigration reform, sustainable social security and Medicare programs, civil rights, climate change … It won’t be easy. But he’s ready.

“Fielding always challenged us to think of diverse points of view, to try to really understand the humanity of our interactions with one another,” the Congressman says. “While we might have diverging views, there’s a guiding principle of working together despite our differences to find common ground for the greater good. It’s something I’ve always had as a value, and Fielding reinforced that.”