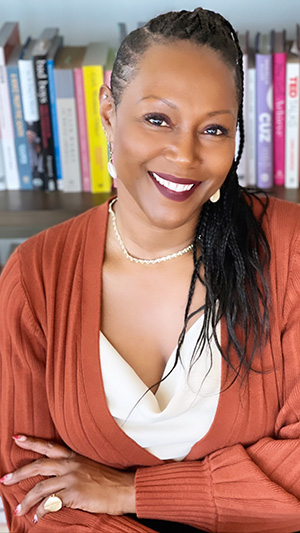 When Monique W. Morris, Ed.D. ‘13 was in the sixth grade, she got into a fight. It wasn’t her first, but fighting at school made this time different. A classmate who had taunted her for weeks stepped on her shoe in gym class and refused to apologize. It didn’t matter that her opponent was taller and bigger, she grabbed the boy and flung him to the ground, the way she learned to do in her judo class.

She could have been “pushed out” of school or arrested that day for fighting. Today, Dr. Morris said, the stakes are higher. Amid systemic racism and what she called “this elevated climate of punishment,” pushout is what disproportionately happens to Black girls. They make up 16 percent of girls in U.S. public schools, but 42 percent of girls’ expulsions and more than a third of girls’ school-based arrests.

What’s behind the numbers? Too often, “typical adolescent behavior, when exhibited by Black girls coming from communities under extreme surveillance, is very often misunderstood as aggressive, even when they’re not,” Dr. Morris said in an interview. As educators, “Our challenge is not to mediate student misbehavior, but rather to better understand that this misbehavior is almost always associated with a student’s perception of, and reaction to, harm.”

Morris’ fight with her classmate was fueled in part by “a hurricane” within, she recounts in a 2018 TED Talk. She had been harmed. Morris, the sixth-grader, “was a young survivor of sexual assault and a girl grappling with abandonment and exposure to violence in other spaces of my life.”

That altercation in elementary school could have derailed for a lifetime, the bright Black girl who “adored Prince, and loved drawing and reading.” But it didn’t. Empathetic educators at her school didn’t call the police or have her expelled. Instead, they took the time to ask her, “what happened?” They also helped her get to the academic finish line.

Today, Dr. Morris, the President and CEO of Grantmakers for Girls of Color, admits that her happy ending is still not a story that many Black girls in this country can tell.

Black and brown boys have largely been at the center of national conversations about the practice that pushes some students out of school and toward the juvenile and criminal justice systems. More often than not, Black girls were right behind them, ensnared by what has become known as the “school-to-prison pipeline.” The Fielding alum set out to change that. Gathering evidence was a start and the research followed.

For years, Dr. Morris has been among a small but growing and relentless community of female scholars, educators, and organizers to document and discuss the forces that have made these girls targets for punishment—and among the most harshly disciplined student groups in the country. The National Black Women’s Justice Institute, the organization Dr. Morris  founded and now chairs, gathered much of that early and groundbreaking data.

From Dissertation to Change

For Dr. Morris, the advocate and educator, such factors have shaped her life’s work—and as a student-practitioner, the plight of girls of color in school propelled her scholarship in Education and Leadership for Change Program at Fielding.

Dr. Morris spoke about the academic roots of her practice in the keynote address she delivered on May 24 during Fielding’s Virtual Alumni Conference. She said her dissertation topic, “Conceptualizing a Culturally Competent and Gender-Responsive Learning Environment for Northern California Black Girls in Confinement,” reflected her interest in the intersection of race, gender and justice—and her curiosity.

After recognizing gaps in the research on Black girls in confinement, curiosity about what landed them in juvenile justice systems and their lived experiences, brought Dr. Morris together with the young people now at the center of her philanthropy, speaking, writing, and teaching.

She’s successfully used a multimedia approach to fuel that work and to help educate those who engage with Black girls about “what renders them vulnerable to harm.” Her acclaimed 2015 book “Pushout: The Criminalization of Black Girls in Schools,” is one of those teaching tools. Dr. Morris recalled that when “Pushout” was first published, “girls of color, particularly Black girls, were largely absent from discourses on equity in public education.” Her book remains a touchpoint.

Her latest book, “Cultivating Joyful Learning Spaces for Black Girls: Insights into Interrupting School Pushout,” will be published in late June 2022. “Sing A Rhythm, Dance A Blues” is among her many other titles.

In many ways, Dr. Morris’ dissertation and research remain a guiding force for her work with Black girls. “I always knew I was never going to prepare research to sit on the shelf or write just to say that I wrote something,” the social justice scholar shared with her Fielding audience. “I wanted to make sure there was an actual change in outcomes associated with what I produce from the scholarship.”

On justice, participatory research, and shaping the remedy

At the core of participatory methods and commitment to justice is the understanding that knowledge is distributed and that the people at the center of the inquiry need to play an active role in shaping the remedy.

This does not absolve those responsible for the harm or those who benefit from the conditions created by harm from also being a part of shaping the remedy. We have to engage our collective vision for the future, not just see justice as a zero-sum gain or a pie to divvy up. Rather, we must embrace the idea that justice is an infinite, guided by our imagination, our intentions, and our labor.

This statement has been lightly edited and condensed for clarity.