Colette Schabram awoke on Sunday morning to the same horrific news that many of us did: A shooter had gunned down more than 100 people at a gay nightclub in Orlando, Florida, leaving 49 dead and more wounded.

But to Schabram, a Fielding alum, it wasn’t just news. It was a call to action. As the executive director of the Pacific Pride Foundation, the only nonprofit organization in Santa Barbara County that offers services and programs to the LGBTQ community, this tragedy— the deadliest mass shooting in US history—was personal.

She and her fiancee immediately cancelled their plans to celebrate an early Father’s Day with family and Schabram began mobilizing the town for a public candlelight vigil that night. 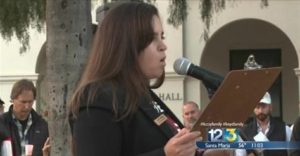 At the vigil she organized on Sunday night, Colette Schabram told gatherers, “You cannot silence us. You cannot use your hate to breed fear or intolerance in us. We stand for love.”

“It was, ‘OK, now we need to create an event, let the police know we’re gathering, figure out who speaks, get a sound system, create a press release, ask my staff if they can come out and work on a Sunday,’” she says. “We knew that it was important that the LGBTQ community has a place to gather and grieve, and to give allies a chance to say, ‘I will show up for you.’”

And show up they did. More than 100 people attended the event in the city’s De la Guerra Plaza, and Schabram spoke along with Mayor Helene Schneider, Islamic Society of Santa Barbara’s religious director Imam Yama Niazi, and Christina Pizarro with the Coalition Against Gun Violence.

Several days later, Schabram—like the rest of the country—is still reeling. June is National LGBTQ Pride month and pride groups around the country were focused on parades and celebrations before the shooting took place. “It’s so unthinkable, that I think everybody’s still in shock,” Schabram says. “It’s hard for the community who can feel it across a country but who can’t be there on the ground helping.” 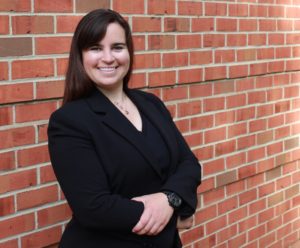 Schabram has made a career out of being on the ground helping. A Santa Barbara native who attended the University of Arizona as an undergrad, she was working in the nonprofit world when she was drawn to Fielding’s Masters in Organizational Management and Development.

“I loved the mission of nonprofits: doing something in your career that gives back to the world,” she says, “but I hated how nonprofits worked. I saw a lot of inefficiency and, working in fundraising, inefficiency was really hard for me. I was working to get money in the door and if it was spent inefficiently, it affected my morale.”

She knew people who had gone through doctoral programs at Fielding who were successful in their fields and, having just paid off her undergrad loans, she wanted a graduate program that would let her keep working full-time. Fielding was the answer.

Two years later, she had the MA she came for (“It’s like an MBA, minus the finance classes,” she says, laughing). After a stint volunteering with the Human Rights Campaign in Washington, DC, where she developed training to onboard volunteers for fundraising events, Schabram was recruited as executive director of Pacific Pride less than a year ago.

It was a pivotal time for the 40-year-old organization, which was struggling financially due to federal funding cuts. But Schabram has been able to keep it afloat—and gives some of the credit to what she learned at Fielding.

“I loved my masters program. I know that it opened the door for me to come be an executive director,” she says. “This last year, I pulled a lot from it. All of the bird’s-eye view and systems training, and healthy vs. sick organization deep dives — I was absolutely pulling from that.”

In times of turmoil, she knows how to pull people together and get things done.

“We were scheduled to literally close our doors and liquidate in February,” says Schabram, who has helped Pacific Pride keep nearly all of its programs open. “Now I’m budgeting for next fiscal year!”

To find out how Schabram is managing the organization’s financial challenges—in a national climate that feels less welcoming to the LGBTQ community than it did just a week ago—join her free Fielding webinar on nonprofit strategy at 5 p.m. PT/8 p.m. ET on Tuesday, June 28.