Do the uncomfortable. Challenge the unacceptable. Become the unforgettable.

Mathematician and statistician Talithia Williams, PhD, received an honorary doctorate and was Fielding’s 2019 convocation speaker on July 20, 2019, during Summer Session in Chicago. Below is her inspiring speech in its entirety.

Fielding!!! I am so excited to be here with the class of 2019 to share with you in this Convocation this morning. This day is ALL about you and your accomplishments!

To President Rogers and Provost Snowden and the Board of Trustees, it’s been an honor and pleasure for me and my family to be embraced by the Fielding Community. Thank you for your leadership of an institution who’s graduates are change agents.

Graduates, your journey to your degree would not have been possible without your support system: Your family, friends, neighbors, coworker, who helped and supported you along this journey. Can we take a moment to give those folks a hand!

I likewise stand before you, not as one, but representing the many who have supported me along the way, and I brought some of my support system along with me today, my amazing husband Donald and our incredible three sons, Josiah, Noah and Micaiah. Would you all please stand?

Fielding graduates, I love that I have a chance to encourage and challenge you as you continue the work you’ve been doing or begin a new work with your new found degrees. In a world inundated with DATA, our life, and even more so, our prosperity as a society, is more than just a data point.  There’s so much more that allows each of us as individuals to be a beneficial presence within the world that we live. 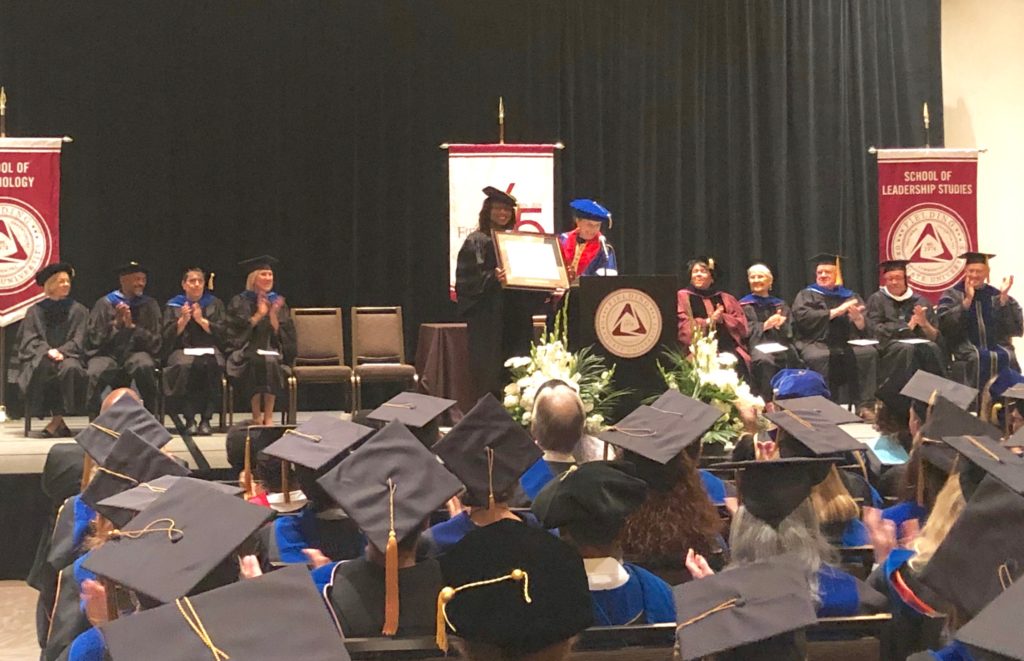 But for the few moments that we have together today, I want to talk with you about how we can leverage data science to solve today’s issues of inequity and social justice…. how we can use Data Science for Social Good. Your path to the degree has emphasized the idea of the scholar-practitioner and how you can catalyze that scholarship to improve society.

I want to challenge you to explore the world of DATA around you from a perspective of being a beneficial presence. Pioneering future innovation that advances and uplifts our society will require that we reach beyond our discipline specific training to bring Data driven decision making to the forefront of our work.

Why is it more important now than ever that you think about Data?  Well, because Data Analytics can make unequitable systems seem fair and impartial. One of the most common examples of this is in “predictive policing”, which uses historical crime data along with statistical modeling to predict where future crime will occur.

But, here’s the problem, due to heavy policing, minority and low income communities are over-represented in the historical data. And so, the more an algorithm directs police to these neighborhoods, the more crime gets recorded there, the more those vulnerable communities are policed, arrested and ultimately incarcerated.  All because of an algorithm’s biased prediction.

As social justice activists, we have to understand even data-driven algorithms can inadvertently contribute to a system of injustice.

I want to leave you with three challenges that I hope you can begin to incorporate as you think about a data-driven approach to social justice.  Sound like a plan?

5 years ago, if you had told me that my statistics class should be “equity centered”, I’d have said, there’s no way. I have no background in equity, I’m not qualified as a scholar to teach it.  I’m not a social scientist and I don’t see how this even belongs in a statistics class. The very thought made me uncomfortable. What does “Introduction to Probability and Statistics” have to do with social justice?  Nothing. So I thought.

My colleague, Susan Martonosi, and I decided to revamp the course.  We wanted to introduce students to a statistical programming language called R.  During this process, we implemented a course-long final project. We wanted students to work on a rich dataset, a dataset that they could use throughout the course to build their statistical practices. What dataset would be rich, complex, interesting and maybe have a relevance to today’s students?

We settled on the NY stop and frisk dataset. How many of you are familiar with this former policy? For those of you that may not know, Stop and Frisk was a policy in NY city where police officers could question and search people they think are suspicious or planning to commit a crime. It ultimately had no effect on crime reduction, but the larger issue was that it was disproportionately applied to communities of color.  And, every year, at least 80 percent and sometimes 90 percent of the people who were stopped were completely innocent.

So now, my students were tackling issues of equity, social justice, while learning statistics! They became empowered not just to apply statistical techniques, but to apply them to solve societal issues. And as an instructor, I had to learn how to navigate the conversation in my classroom. Benjamin Franklin said it best, “Justice will not be served until those who are unaffected are as outraged as those who are.”

This is what you came here for.  You came for the very idea that you could tailor make a graduate experience that would equip you with the knowledge, the skills and the expertise necessary to ultimately challenge the unacceptable.

You, know, not all data is created equal. I find some data…unacceptable. Not that it’s necessarily inaccurate.

When I first arrived at Harvey Mudd College, I had hardly any students who looked like me in my statistics classes. And when I looked at the data on women and underrepresented minorities nationwide, I could see that we had a problem motivating, encouraging and supporting girls (especially girls of color) to study Science, mathematics, engineering, computer science. The numbers appeared to be declining in the very subjects where demand was the greatest.

The data was accurate…but unacceptable.

As a new tenure track professor, tackling the systemic problem of the underrepresentation of women in STEM was not what I was hired to do. The problem is too great. What could I realistically do about it?

Well, I was inspired by this quote from Bill Gates, he says (slowly) “Don’t let COMPLEXITY stop you. Be activists. Take on the big inequities. It will be one of the great experiences of your lives.”

So in 2010, I partnered with a local nonprofit organization called Sacred Sistahs and we created a STEM conference for middle and high school girls of color in southern California. We brought in diverse women speakers to share the work they do and the paths they took to achieve their STEM degrees. We wanted the girls to see examples of who and what they could become so that they could begin changing the narrative.

We wanted to challenge the unacceptable.

Lastly, number 3 is Be the unforgettable.

I want to leave my footprints on the sands of time

When I leave this world, I’ll leave no regrets

Leave something to remember, so they won’t forget, I was here.

That is, of course, a quote from that great scholar philosopher Beyonce!

But I love that last line, “Leave something to remember.”  Your legacy needs to live beyond you. Why will it matter that you were here?  Will your family, your community, your neighborhood, our society, our world be ANY different because you were here?

As newly minted Fielding graduates, you have already made a commitment to advancing equality and justice through your work in society.  So why, at this point in our history, is it so important to be both social justice minded and data driven?

Dr. Megan Price is Executive Director of the Human Rights Data Analysis Group.  In a recent interview, she beautifully explained the importance of using data science for social good. She says, “The most visible and directly linked way that our work influences social justice is when we’re asked to testify in court cases as expert witnesses. Those are some of the clearest examples, and most of this work has been done, again, by my colleague Dr. Patrick Ball. He typically is the one who testifies and presents our analysis in court cases.

Some of the ones that have the best outcomes are in 2013 he testified in Guatemala in the case against General Ríos Montt, who was the de facto leader of Guatemala in the early ’80s and was charged with acts of genocide. And Patrick presented some analyses that our team did that showed specifically that members of the Mayan population in Guatemala during this time period in some specific regions had a five to eight times higher risk of being killed by the army than non-Mayan members of the population.

The lawyers argued that that statistical pattern to the violence is consistent with ethnic targeting and with genocide. Ultimately, the judges agreed. The judges found Ríos Montt guilty, and, in fact, they referenced Patrick’s analysis in their verdict.

Again, this is one of the most positive possible outcomes for us, because what the judges said was that the analysis Patrick presented confirmed numerically the stories the individual victims were telling. “We view that as our role, to affirm and to amplify the voices of victims and victim communities.”

Did you catch that at the end? Their analysis of the data, confirmed the stories that the victims were sharing. The data-driven quantitative analysis supported the qualitative analysis, the memories, the opinions, the feelings of the victims.

I believe the greatest value in our future will be the connectivity of communities of people with data in ways that enhance decision-analytics for the most vulnerable in our community.

Fielding graduates, you have the agency to infuse your work with Data driven analytics for social and public good.  We can all work to solve the problems of society, when we Do the uncomfortable, challenge the unacceptable and become the unforgettable.  Congratulations class of 2019!