Creating a No Take Zone in the Pacific

One of the things that sets Fielding apart from other graduate schools is its roots in the real world. Our faculty isn’t made up of ivory-tower academics, but rather boots-onthe-ground scholar-practitioners who apply their knowledge to improving their communities—and helping their students do the same.

A case in point is Four Arrows, aka Don Jacobs, PhD, EdD. Doctoral faculty in the School of Leadership Studies, Four Arrows practices action research with social and ecological justice in mind. 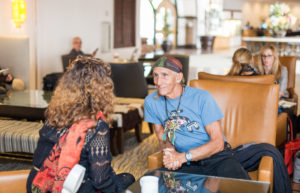 “Action research is identifying a problem, coming up with a solution, implementing the solution, and evaluating the solution,” he says. “It’s usually about helping improve something within a community, and often involves community participants.”

Such a process describes Four Arrows’ recent work at Standing Rock, where he has taken part in the protests against the laying of an oil pipeline through sacred Indian territory and under the Missouri River.

It also describes a project he’s been leading for several years in Central Mexico: to help a small fishing village create the first No Take Zone on the Pacific Ocean.

“The problem is that our oceans are dying,” he says, citing studies that show sustainable fisheries will be depleted by 2048. “I see people going out on their boats further and further to get smaller and smaller fish. And most people in the world don’t know about this situation.”

For three years he has been working with the fishing cooperatives up and down the Costalegre along the Pacific Ocean, to convince them to establish and abide a no-take zone—an area where no one’s allowed to fish. Other marine parks have shown that within three to nine years of no fishing, marine life returns in abundance. A classic example is on the Sea of Cortez at Cabo Pulmo—but currently, less than half of one percent of our oceans have no-take zones.

It’s hard to convince fishermen not to fish! “They all say, ‘We know it’s a problem, but even if we agreed, our competitors would sneak in and they would be reaping the benefits while we’d be hurt,’” Four Arrows says.

It took several years of working with community groups, marine biologists, and the government, but he finally got the 300 citizens of Arroyo Seco to agree to the terms. He launched a successful Kickstarter campaign and raised the nearly $29,000 required for the area study and official report. Red tape has stalled the project at various points, but Four Arrows thinks it may become the first no-take zone that is actually sponsored and maintained by the 14 fishing cooperatives along the coast, rather than by the government.

“The goal isn’t just to solve the problem,” he says, “but to provide a template for others to use, and do the same.”

What makes him so passionate about this issue? It’s his indigenous heritage, he says, and its emphasis on the Seventh Generation and respect for all of life, human and non-human.
A former Marine Corps officer and co-founder of Veterans for Peace in Northern Arizona, Four Arrows inspires his Fielding students to put their leadership skills to work in ways that matter.

“In the Marine Corps, when you send your troops in to do something, you don’t just stand back and send them,” he says. “You lead them. If I’m going to push students into areas where they’re passionate and not do it myself, then I’m not following that example.

“At Fielding, we really are creating change agents who will get out there and change the world—and this requires that we walk the talk ourselves.” ˑ