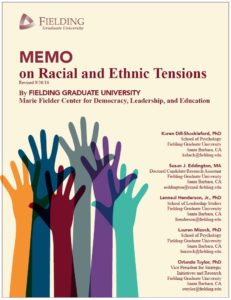 This summer, racial and ethnic tensions throughout the United States reached crisis mode as the public watched news story after news story about fatal shootings of African Americans by police—and deteriorating relations between police departments and minority communities.

It was in that climate that four members of Fielding’s academic and leadership community, along with a doctoral student, began work on a project that looked closely at these tensions—with the goals of better understanding them, and proposing fresh strategies that might might help reduce them.

The result is the Memo on Racial and Ethnic Tensions, a report funded by a grant from the Kettering Foundation and produced through Fielding’s Marie Fielder Center for Democracy, Leadership, and Education.

“We want to engage in the public discourse around issues that impede or promote democratic processes,” says Orlando Taylor, PhD, Fielding’s vice president for strategic initiatives and research, and director of the Marie Fielder Center. “Racial and ethnic tensions revolving around poor police-community relations undermine confidence in government—and ultimately democracy itself. We thought we should take a fresh look at these tensions through different theoretical and research perspectives in hopes of identifying some new strategies that communities might employ to mitigate these problems.”

Weaving together ideas from Critical Race Theory, Internal Colonialism Theory, Intersectionality Theory, Aversive Racism Theory, and the Stereotype Content Model, the memo explores the mental health consequences of race and ethnicity based trauma and the role and influence of the media, and offers research-based suggestions for reducing racial and ethnic tensions.

“The focus was on how the public was talking about it and what might help,” says Media Psychology faculty member Karen Dill-Shackleford, PhD, who served as senior author of the memo. The other authors were Dr. Taylor; Clinical Psychology faculty member Lauren Mizock, PhD; School of Leadership Studies faculty member Lenneal Henderson, PhD; and Media Psychology student Susan Eddington. “Susan is a great example of what a Fielding student brings to an important project that is different from the norm. She had extensive experience in working in the realm of politics, as well as compiling this type of data across sources, joined with a true passion for the topic. She worked tirelessly on this.”

The entire team made for an invigorating working experience, Dr. Dill-Shackleford says: “Dr. Taylor is an inspirational leader, and Drs. Henderson and Mizock bring so much amazing knowledge and experience to the table. I really looked forward to spending time with the team, to soak in what they knew.”