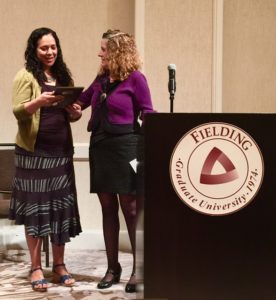 Today Fielding Graduate University President Katrina Rogers dedicated the Outstanding Leadership for Social Justice Award posthumously to Jane Addams and  Ida B. Wells, two champions of social justice who worked together at the turn of the 20th Century to fight against racism and inequality in Chicago and beyond. The presentation took place during the university’s Summer Session in Chicago, in recognition of the kinds of leaders the new School of Leadership Studies hopes to produce and inspire.

Born into privilege, Jane Addams founded the Hull-House as a resource center for the immigrants and poor of Chicago, and became the first American woman to receive the Nobel Peace Prize. Born into slavery, Ida B. Wells became a journalist, suffragette, feminist, early leader of the Civil Rights movement, and one of the founders of the NAACP.

“They have very different backgrounds and perspectives, but they were both thinkers, writers, educators, and they worked together for social change in Chicago,” President Rogers said, “and we admire these two women.” 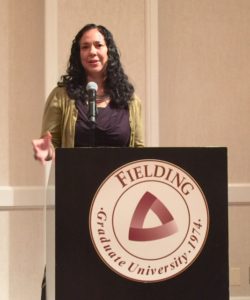 Jennifer Scott, director of the Hull-House Museum, accepted the award on the women’s behalf.

“I love that Jane Addams was called the most dangerous woman in America for her peace activism,” Scott said, adding that the museum still features the historic dining hall where Gertrude Stein, Eleanor Roosevelt and other movers and shakers of the day would gather to debate social issues.

The award was instigated by a committee of Fielding faculty members, spearheaded by Valerie Bentz and including Orlando Taylor, David Blake Willis, and Connie Corley. 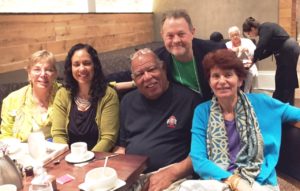