Fielding Graduate University is pleased to present the 2020 Creative Longevity and Wisdom Outstanding Scholar Practitioner Award to the Ace of Cups Band. Formed in the 1960s as the first all-female rock band, band members reunited in their sixties over the last decade, producing two albums and leading advocacy efforts in support of positive aging. 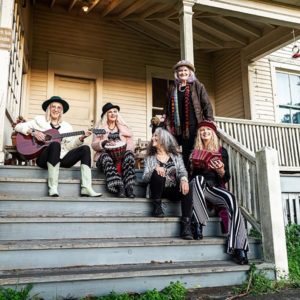 The Ace of Cups has been featured on CBS This Morning, NPR and in feature articles in The New York Times, The San Francisco Chronicle, The Guardian and Billboard among other leading media sources.  The song, “Put a Woman in Charge” (https://www.aceofcups.com/100) was produced to celebrate the 100th anniversary of the 19th Amendment of the U.S. Constitution where band members bring together over 40 luminary women in song. “Basic Human Needs” from their latest album Sing Your Dreams includes Wavy Gravy’s song  of the same name, which honors his 80th birthday and the  work of Seva Foundation he co-founded (https://www.aceofcups.com/music).

Connie Corley, PhD who heads Fielding Graduate University’s Creative Longevity and Wisdom doctoral concentration notes, “The Ace of Cups band, in their music and their messages, represent the powerful intersection of creativity and advocacy.  They empower women of all ages and demonstrate that well into their later years, people can inspire action.”