In honor of American Indian Heritage Month, Navajo alum Miranda Jensen Haskie, EdD, 2002, shares what she learned and studied at Fielding — and how she has put it to use since graduating. 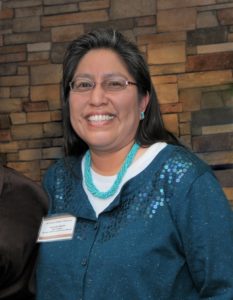 My dissertation, “Preserving a Culture: Practicing the Navajo Principles of Hozho doo K’e,” examined the life of a 20th century Navajo leader, Albert “Chic” Sandoval. I conducted grounded theory research, analyzing archival data primarily and conducting interviews secondarily. Some recommendations I made were to research one’s family history and/or tribal history and to travel as one builds intercultural ties.

I thoroughly enjoyed my doctoral studies with Fielding Graduate University. I found Fielding’s pedagogy aligned perfectly with Navajo thought. While I was the architect of my own educational plan, the faculty provided tremendous support as I attained my doctorate. The
Fielding faculty were practitioners in the field applying the methods they instructed, and helped me become a scholar.

Since earning my doctorate in 2002, I have implemented numerous projects based on the recommendations I made in my dissertation. The most significant contribution I made was a collaborative project between Diné College (DC) and Winona State University (WSU). Over a six-year period, Navajo students from Diné College and journalism students from Winona State University participated in a Navajo Oral History project led by my colleague and I. Collectively, we produced 27 Navajo living histories, nine of which included the famed Navajo Code Talkers. Today, those documentaries are now archived at the Smithsonian’s National Museum of the American Indian. Each year, we produced four to five living history documentaries and premiered them at each institution. The Navajo elders profiled in the living documentaries and their families were invited to the premiere at DC, where we held a “red carpet” event with food and the media. Students at both institutions had an opportunity to travel to each college to participate in the premiere. The Navajo elders were given copies of their living history for themselves and family. Students were then able to use the living history documentaries in their portfolios as they applied for graduate school or employment.

Another project I co-led with a colleague was an Intercultural Exchange between Diné College (DC) and Northampton Community College (NCC). Over a three-year period, students from each institution were paired together over one semester, communicating on a social networking website called Ning as they learned about each other’s cultures and participated in a one-week exchange at each institution. In their exchange, NCC students spent one-week on the Navajo Nation hosted by a Navajo family and DC students spent one-week in
Bethlehem, Pennsylvania, hosted by families on the East Coast. Each of these exchanges encouraged cross-cultural communication, encompassed intergenerational learning, and affirmed Navajo identity as students developed renewed interests in the Navajo culture and language along with revitalized relationships with their own grandparents.