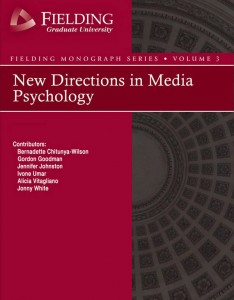 One reason is that the frontiers of Media Psychology will continue to move as long as the intersection of media and human behavior continues to shift as well, powered by astounding technological innovation that actively stimulates new areas of human endeavor. One goal of this monograph, then, is to illustrate the range of topics that the media psychology discipline can encompass, as illustrated by the recent dissertation research of six media psychology alumni from Fielding Graduate University.