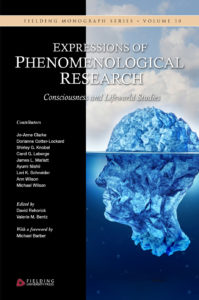 This book, the tenth monograph by Fielding University Press, is dedicated to the topic of phenomenological research across a broad range of scholarly practice, edited by Professors David Rehorick and Valerie Bentz, who have spearheaded phenomenological research at Fielding for more than two decades. The foreword was written by Michael Barber, Professor at Saint Louis University’s Department of Philosophy, while Casandra Lindell served as associate editor.

The book includes the following chapters:

In addition, an in-depth analytical review of seventy-six doctoral dissertations reveals three distinct methodological contributions—“phenomenologically-based,” “-oriented,” and “-inspired”— to the study of consciousness and the sociocultural lifeworld.

David Allan Rehorick, PhD (Senior Editor) is Professor Emeritus at the University of New Brunswick (UNB), Canada where he taught from 1974 to 2007. He is also Professor Emeritus at the Fielding Graduate University, serving as Research Consulting Faculty (1995–2006), then full-time faculty (2007–2012). He has served on six editorial boards of academic journals, including Review Editor of Human Studies: A Journal for Philosophy and the Social Sciences.

Valerie Malhotra Bentz, Ph.D. is a professor at Fielding Graduate University and director of the Somatics, Phenomenology, and Communicative Leadership (SPCL) concentration, and previously served as associate dean for research. She previously taught at Texas Woman’s University, was editor of Phenomenology and the Human Sciences (1994-1998), and served as president, board member, and co-chair of several professional associations.