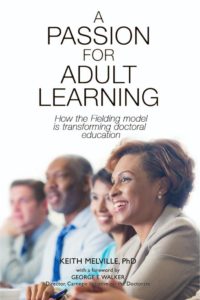 The book relates how Fielding’s founders, a colorful group of publicly engaged scholars and practitioners, were visionaries intent on creating a new kind of educational experience for adults. They set out to change how graduate education is done by offering one of the first fully accredited low-residence doctoral programs. The book shows how Fielding’s program started, how it has evolved, and how many elements of its learning model have been adapted and adopted over the past two decades by mainstream programs.

Fielding’s story is particularly pertinent today. Increasingly, questions have been raised about how doctoral education is done, and whether mainstream programs are equipping their graduates with the knowledge and competencies they need to succeed. This account of a pioneering program sheds a revealing light on the challenges involved in breaking the traditional mold, and the ways in which the principles and practices of progressive higher education have influenced mainstream programs.

Fielding’s experience, which is vividly captured in this highly readable account, offers a lens and a mirror for many people in higher education who are engaged in institutional re-invention and redesigning doctoral education for the 21st century.

A Ph.D. sociologist who graduated from Columbia University, Keith Melville has been a faculty member at the Fielding Graduate University since 1983. In the 1970s, he worked in the White House, where he was a writer and staff member for the President’s Commission for a National Agenda for the 1980s. Subsequently, he worked at the Public Agenda Foundation in New York, founded by former Secretary of State Cyrus Vance and pollster Daniel Yankelovich, where he was senior vice president.

He is the author of numerous trade books, college-level text books, journal articles, and book chapters, including Communes in the Counter Culture, a featured selection of the Book of the Month Club, and Marriage and Family Today. He has also contributed to The Deliberative Democracy Handbook (Jossey-Bass, 2006), and several dozen other articles and book chapters.

“This well written and insightful case study of the evolution of Fielding Graduate University takes us on a journey into the thinking and values of the Institute’s visionary founders, and the challenges they and the others who joined their dream faced.”