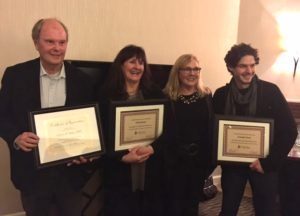 “Once in a while, you run across somebody who is truly extraordinary,” said faculty member Garry Hare of Mike Neal. “He challenged us as his colleagues and as his faculty. He was just a staggeringly terrific guy.”

Neal held 19 US patents, authored several children’s books, volunteered with Habitat for Humanity, and led numerous technology companies. At Fielding, he was known for his passion for helping others, including leading teams of his Fielding colleagues to publish articles and present their work at prestigious conferences around the world.

The scholarship funds for the Neal Award are raised from a fall auction, student donations, and a pizza party at Winter Session. The awards are given annually to students who demonstrate outstanding academic achievement, media innovation, and collaboration with and support of fellow media scholars.

Chris Reyes was recognized for extraordinary work throughout the masters program, with a capstone project that ties into his plans to become a medical doctor. “Physicians aren’t keeping up with technology,” Reyes explained. His project looks at how “training them to be collaborative, media savvy and adaptive will make them better at treating patients.”

PhD student Linda Durnell has served as a teaching assistant during her Fielding studies, as well as co-designing new student orientation and leading a workshop at Session on presenting at conferences. Program Director Jerri Lynn Hogg commended her “zest for learning and insatiable desire to consume everything media psychology and connect to her peers and colleagues and share that knowledge.”

Garry Hare was also honored at the ceremony for 10 years of service on faculty.