NEW YORK CITY — On Saturday, October 13, 2018, the Kristine Mann Library of the Analytical Psychology Club of New York will host Sanford Drob, PhD, and his new publication Archetype of the Absolute: The Union of Opposites in Mysticism, Philosophy and Psychology, published by Fielding University Press. The event will be held at its facility on 28 East 39th Street, New York, N.Y. 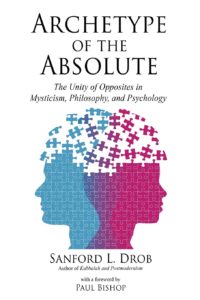 In Archetype of the Absolute, Dr. Drob traces the “problem of the opposites” in the history of ideas, theorizing that apparent oppositions in philosophy, including those that underlie competing paradigms in psychology, are actually complementary rather than contradictory.

Dr. Drob argues that the doctrine of the complementary union of opposites underlies the mysticism of the Tao and Kabbalah, the dialectical thinking of Hegel, the psychology of Jung, and various interpretations of quantum physics–and has been called the “master archetype.” In creating this intellectual tour de force, Dr. Drob draws upon thinkers from Heraclitus to Jacques Derrida and Slavoj Žižek to resolve metaphysical and psychological puzzles and reconcile a wide range of oppositions, including those between determinism and free-will, realism and idealism, reason and imagination, and theism and atheism.

The event is from 1-4 pm ET and will include brief talks by Dr. Drob and fellow guest Jay Sherry, whose book, The Jungian Strand in Transatlantic Modernism, is published by Palgrave Macmillan. Dr. Joseph Moore, president of the Analytical Psychology Club, will give introductions.

Sanford L. Drob is core faculty in the Clinical Psychology doctoral program at Fielding Graduate University and on faculty at the C. G. Jung Institute in New York. He holds doctorates in both philosophy and clinical psychology, is a prolific artist, and has made contributions in the fields of philosophy, theology and clinical/forensic psychology.

The Analytical Psychology Club is the oldest Jungian society in the United States. Formed in 1936, its purpose is to provide a gathering place for self-discovery, the key to Jungian therapy, by hosting social gatherings, meetings, and study and discussion groups where members and guests exchange ideas, thoughts and feelings about analytical psychology.