Jane Addams’ Leadership and the Crises of Our Time: Racial Unrest, Pandemic, and War

Home » Jane Addams’ Leadership and the Crises of Our Time: Racial Unrest, Pandemic, and War
By Carol Hirashima|Published On: July 17th, 2020|Categories: Uncategorized| 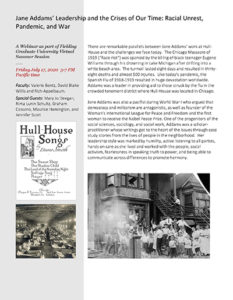 There are remarkable parallels between Jane Addams’ work at Hull- House and the challenges we face today. The Chicago Massacre of 1919 (“Race riot”) was sparked by the killing of black teenager Eugene Williams through his drowning in Lake Michigan after drifting into a white beach area. The turmoil lasted eight days and resulted in thirty- eight deaths and almost 500 injuries. Like today’s pandemic, the Spanish Flu of 1918-1919 resulted in huge devastation worldwide. Addams was a leader in providing aid to those struck by the flu in the crowded tenement district where Hull-House was located in Chicago.

Jane Addams was also a pacifist during World War I who argued that democracy and militarism are antagonistic, as well as founder of the Woman’s International League for Peace and Freedom and the first woman to receive the Nobel Peace Prize. One of the progenitors of the social sciences, sociology, and social work, Addams was a scholar- practitioner whose writings got to the heart of the issues through case study stories from the lives of people in the neighborhood. Her leadership style was marked by humility, active listening to all parties, hands on care as she lived and worked with the people, social activism, fearlessness in speaking truth to power, and being able to communicate across differences to promote harmony. 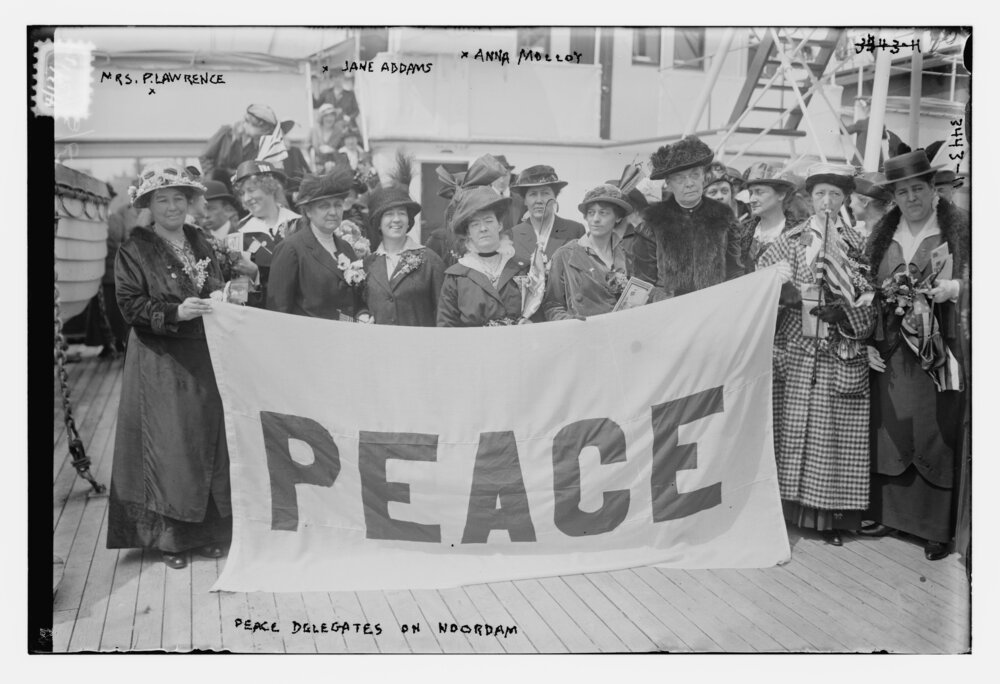 Valerie Malhotra Bentz, PhD, is a Professor in the School of Leadership Studies at Fielding Graduate University. Jane Addams is one of her heroines as both scholar and practitioner and appears along with George Herbert Mead and other philosophers of note in an honored fictionalized role in her novel, Flesh and Mind: The Time Travels of Dr. Victoria Von Dietz , (2012).

David Blake Willis, PhD, Professor of Anthropology and Education at Fielding Graduate University and graduate from the University of Chicago.

Rich Appelbaum, PhD, Professor of Sociology at Fielding Graduate University and graduate from the University of Chicago.

A plaque honoring Jane Addams and Ida B. Wells, African American activist in the anti-lynching movement, was awarded by President Rogers from Fielding and is currently in the Hull-House Museum.

About the Author: Carol Hirashima