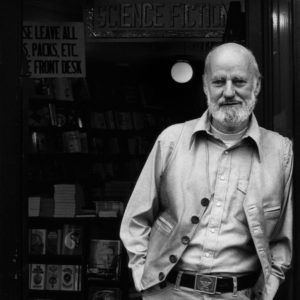 Lawrence Ferlinghetti, Ph.D., died Tuesday, February 23 at age 101.  In 2014 Ferlinghetti received the Creative Longevity and Wisdom/Aging Concentration Outstanding Scholar-Practitioner Award from Fielding Graduate University. This award honors lifelong achievements of one who through creativity and wisdom has made significant contributions to society.  The recipient of the award will have made an important impact on the community through his or her art, writing, speaking, institution building, political and social activity, social justice work, and/or financial contributions.

Dr. Ferlinghetti was a founding member of the Beat Generation Poets.  Growing up in the 1950s,  I was inspired by his spirited and open critique of the cold war and the false consciousness that permeated U.S. culture.  In the 1980s I met him at a university poetry reading and we became correspondents and friends.

Ferlinghetti has written more than 35 books of poetry. He has been the recipient of numerous prizes, including the Los Angeles Times’ Robert Kirsch Award, the BABRA Award for Lifetime Achievement, the National Book Critics Circle Ivan Sandrof Award for Contribution to American Arts and Letters, and the American Civil Liberties Union’s Earl Warren Award. He was awarded the Key to the City of Florence, Italy, for his work as an artist.  Some of his paintings are available at the George Krevsky gallery of American Art in San Francisco.

Lawrence Ferlinghetti established the City Lights bookstore in San Francisco which has been a beacon for peace and social justice. City Lights Books has demonstrated a commitment to preserving and promoting the diversity of voices and ideas that are represented in quality books.  Lawrence said about City Lights: “As the increasingly concentrated mass media and new information technologies change the way people live, work, and think, we believe that nurturing the ability to think critically, to discern truth, and to communicate knowledge is essential to a democratic society.”

Ferlinghetti’s work challenges the definition of art and the artist’s role in the world. He urged poets to be engaged in the political and cultural life of the country. As he writes in Populist Manifesto: “Poets, come out of your closets, open your windows, open your doors. You have been holed up too long in your closed worlds… Poetry should transport the public to higher places than other wheels can carry it…”

At age 93, he published his 36th book of poetry, called Time of Useful Consciousness.  Hailed by the New York Times as his best work, it is a call for action while there is still time.  It depicts civilization on the abyss of destruction due to the effect of humanity on our ecosystems and the collapse of democratic institutions. Ferlinghetti calls us to action while there may still be time. The following are poems from this work:

“SONG OF THE THIRD WORLD BIRDS”

“ARE THERE NOT STILL FIREFLIES”

Does not a dawn every day still light up our land?
Is there not still a full moon once a month

May Ferlinghetti’s voice and courage continue to inspire others to follow in his footsteps.

See more at valeriebentz.com
Transforming Consciousness for a Livable World