Small steps to get you to the top of the mountain 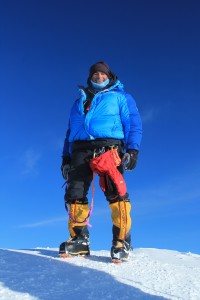 Steve Camkin, PhD, was only a young schoolboy when he first wrote an essay about climbing Mount Everest. He started canyoneering and rock climbing with his local YMCA in Sydney at 12 and dreamed of being the first Australian to reach the imposing summit.

After two compatriots beat him to the top in 1984, Dr. Camkin sought other outlets in the outdoors through Australia’s Royal Military College and the Outward Bound program. He then transitioned into a strong, well-rounded career in organizational leadership. Two decades later, with a diverse professional background working in large corporations and for himself, Dr. Camkin yearned for new challenges. He enrolled at Fielding in pursuit of a doctorate in Human and Organizational Systems (HOS) and dusted off his climbing shoes to start training again.

His first attempt at climbing the Aconcagua, the highest peak in South America at 22,841 feet, was cut short a mere 1000 feet from the top by altitude sickness. He returned several years later to successfully climb to the top, giving him the confidence to prepare to conquer Everest, which he promised himself would be a personal “reward” for completing Fielding in 2008.

With additional high altitude climbs in Bolivia, an ascent of Kilimanjaro, and dozens of trips with a heavily weighted backpack up a local 3,500 foot hill, he felt ready for Everest. During a slight detour on a visit to Rio, Dr. Camkin went rock climbing and hang-gliding, which resulted in a hamstring pull by the end of the trip. After finally recovering from that injury, Dr. Camkin flew to Ecuador for his final training on Chimborazo (20,564 feet) and four other peaks, where he caught bronchitis for the first time in his life. The hits just kept on coming!

When these health issues did not resolve themselves, he was faced with the dilemma of whether or not to cancel his trip but decided to roll the dice and go for it. On the first attempt, Camkin and his climbing partner were forced to back down 1,500 feet from the top by deadly weather. They spent 11 days above 21,000 feet to get a second shot at the summit and Dr. Camkin finally achieved his lifelong goal by reaching the top of Mount Everest (29, 035ft). 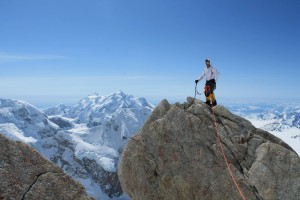 Since then, he has climbed the highest peaks on every continent and on other impressive expeditions, has trekked across the island of Borneo, led a 42 day trek though the Sierras and mountain-biked, solo, in the winter, down the ice of the Yukon River for 550 miles.

Today, Dr. Camkin has his own company “Three Peaks Consulting.” He applies his doctorate work, outdoor background and corporate professional experience to facilitation and organizational work, instructional design and speaking.  Dr. Camkin and BestSellers Publishers also recently released “High Altitude leadership: Small steps to get you to the top of big mountain” an exciting collection of stories and lessons learned from his outdoor experiences in bull-riding, caving, skydiving and other sports.

For Dr. Camkin, Fielding’s learning model was instrumental to his earning of a PhD. As is the case for many adult learners, putting his career on hold to go back to school was not an option. Fielding’s flexibility allowed him to integrate the program into his busy life. Besides working on his dissertation at his own pace and around his schedule, Dr. Camkin loved being able to integrate “passion projects” in his course of study.  As one example, he taught skiing at a differently abled camp as part of his applied project in the Human Learning and Motivation module of the HOS program. This practical learning experience gave him the opportunity to go beyond the traditional classroom setting to write a paper reflecting on the role of educators, methodology and what can be learned from teaching to different audiences.

Fielding’s HOS program interested Dr. Camkin because of its strong system perspective. He found that learning to go in depth in some areas, while taking a peripheral view in others in order to understand how they interconnect, was useful both in his academic endeavors and in climbing. “As a climber,” he said “if you get too focused on the footsteps immediately ahead, you can miss things that are happening in the periphery, like bad weather closing in on you. At the same time, if you are always gazing out too far in the horizon you can trip over your feet and slide off the side of the mountain.”

Dr. Camkin noticed how those concepts applied in his recent trip to New Guinea to climb Cartenz Pyramid, which is situated in a zone of political unrest. “There is a lot of system perspective in climbing, as mechanical, geographic, and even political aspects come into play, as well,” he said, remembering that the current jungle approach route had been redirected several times and that colleagues on his climbing team had still run into protesters’ barricades.

Of his PhD journey, Dr. Camkin suggested it was similar in a lot of ways to conquering the peaks of the Seven Summits. “When climbing Everest, you have to climb it about two and a half times; it is not a linear progression,” he said: “There are points where you have to go backward or down to find the easiest route, you need to climb and descend to acclimatize, and there are ‘false summits’ where you think you are nearly there but more terrain lies hidden from view.”

Doctoral candidates often face similar challenges he said: “You need to have your purpose clear, support in place, and the mental, physical and emotional discipline to know setbacks are coming and keep on moving forward.”

Dr. Camkin also emphasized the importance of setting intermediate goals, both while climbing and in the scholarly world. “Sometimes it is making it the next hundred yards or to the next camp; sometimes it is getting the next draft out,” he said. And in both undertakings, of course, it’s important to keep your eyes on the prize.