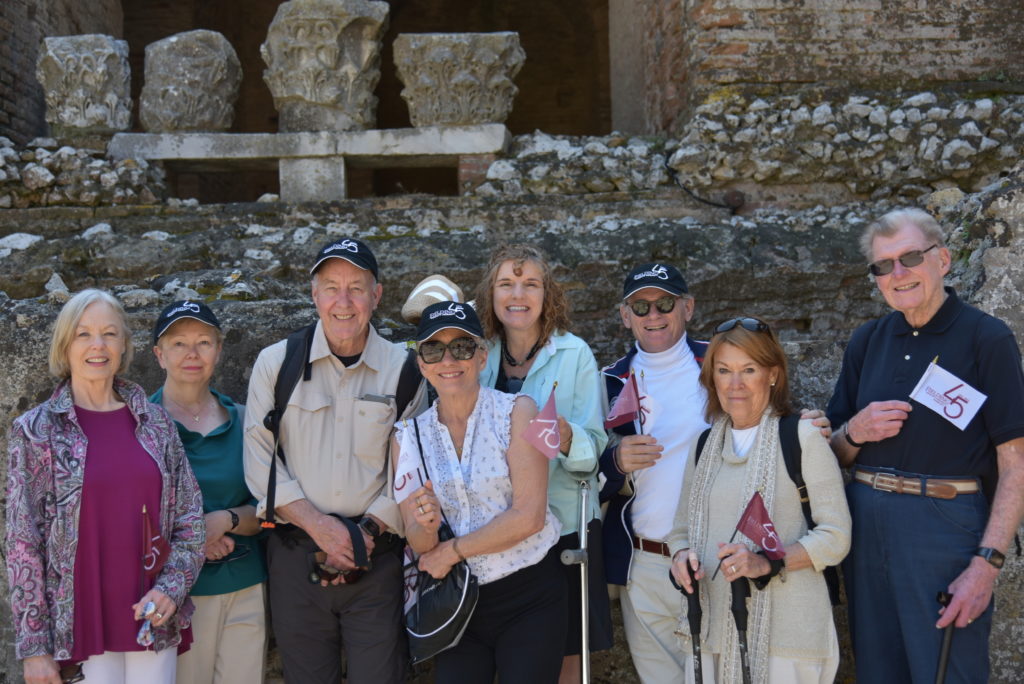 The Fielding crew at the amphitheater at Taormina, Italy

Several members of the Fielding community have just returned from a scholarly cruise from Rome to Jerusalem celebrating the university’s 45th anniversary. The tour was guided by faculty member Jean-Pierre Isbouts, a leading scholar and historian in ancient art and architecture.

Below, a few guests reflect on the journey. 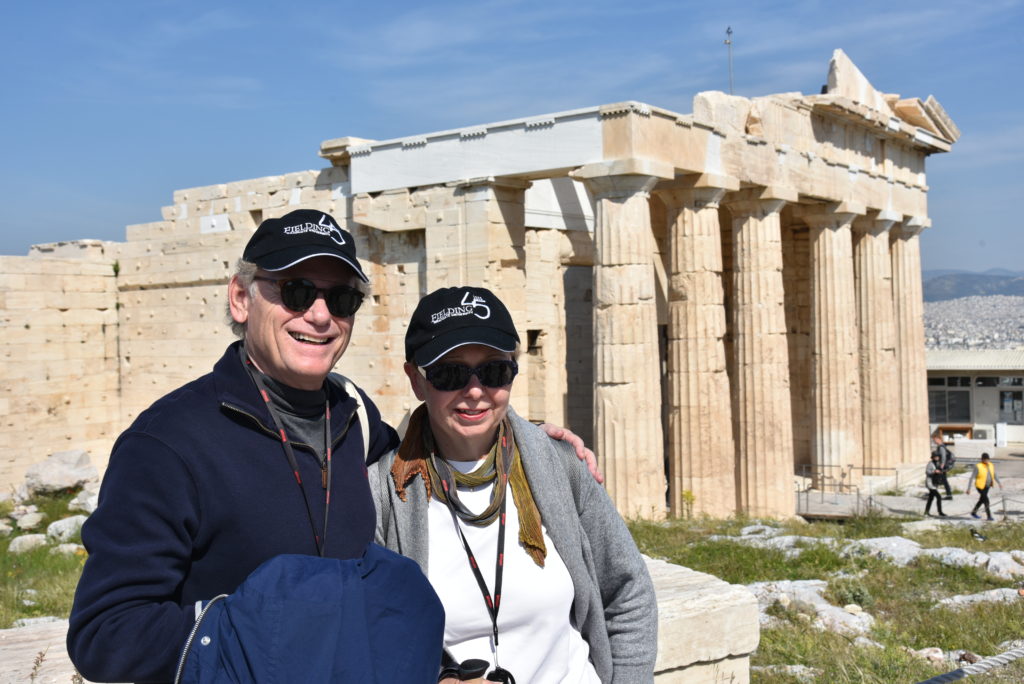 What a privilege to tour with Fielding faculty, alumni, and trustees. Walking in the steps of Socrates, Plato, Jesus, the Apostle Paul, and Julius Caesar was amazing, but even more amazing were our two leaders, Jean-Pierre Isbouts and Katrina Rogers.

Jean-Pierre Isbouts served as not only as our private tour guide,

but also the lecturer for the entire cruise ship. Jean-Pierre is a Renaissance Man, and extraordinarily knowledgeable. I was touched by his attentiveness to each and every person, whether in our small group, or when he was lecturing to an entire concert hall of people. As our president, Dr. Rogers took on the role of grand organizer, keeping everyone informed, invited to tea, dinners, and orchestrating several tours. She was amazing. She could walk up to the maître d’ at the dining rooms and list off the numbers of each of our cabins.

I could go on about the many new friends I made on this trip, but I will conclude by saying that what I enjoyed most about this cruise was the kindness, generosity, and incredible intelligence of my fellow travelers. I feel enormous gratitude for the privilege of having participated in this tour. 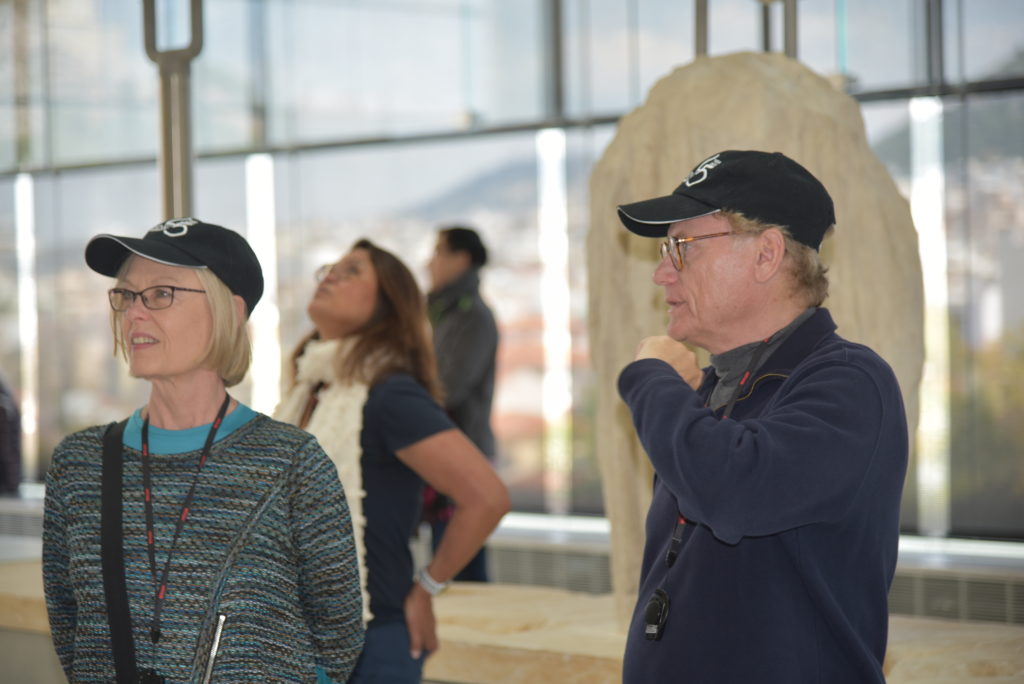 As a student of democracy, what could be better than a trip to Athens, the birthplace of democracy, and Rome, a model for representative democracy? Standing atop Palatine Hill and gazing at the Roman Forum where citizens gathered to hear the oration of their Senators was an emotional thrill. Climbing to the top of the Acropolis to appreciate the majesty of the Parthenon was almost unbelievable. Equally amazing, though, was the Temple of Athena who, myth tells us, bested Zeus in a contest for control of Athens and the surrounding territory. What could be better?

Well, as a lifelong learner you could add a stop at Rhodes, where both Cicero and Julius Caesar traveled to study before assuming leadership in the Roman Republic. As the pièce de résistance, include the camaraderie of alumni, other faculty, board members, the President of the University and several significant others. What amazing community!

As an alumnae, I have returned to Fielding National Sessions year after year to experience what I call my Fielding Fix. It is an unparalleled combination of scholarly inquiry, community and friendship. It turns out that same ‘fix’ can happen anywhere Fielding folks gather. 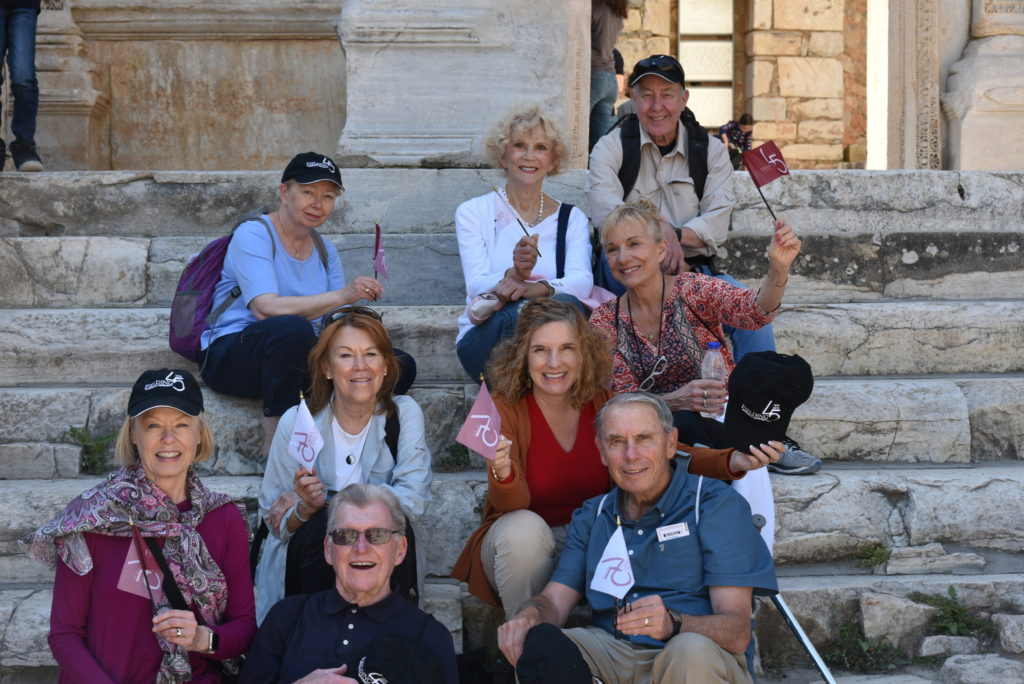 Patricia Zell, 2nd from left, with white flag, and the Fielding crew at the Library at Ephesus, Turkey.

The Fielding cruise not only brought us to historic places of Biblical times and the stories which accompanied the evolution of so many ancient cultures, but so typical of Fielding, it brought us to higher levels of consciousness of how our lives have been shaped by those cultures and the values that Fielding exemplifies.

In my time with Fielding, in addition to the members of Fielding’s Board of Trustees, I have come to know a few members of the Fielding faculty and Fielding alumni, but one rarely has the luxury of spending quality time with such gifted people – many of whom have published significant works of high academic quality and life-important lessons.

The Fielding cruise was that luxury — to be wrapped in the warm and comfortable blanket of genuine caring and concern for one another – generating laughter and joy, as well as compassion. 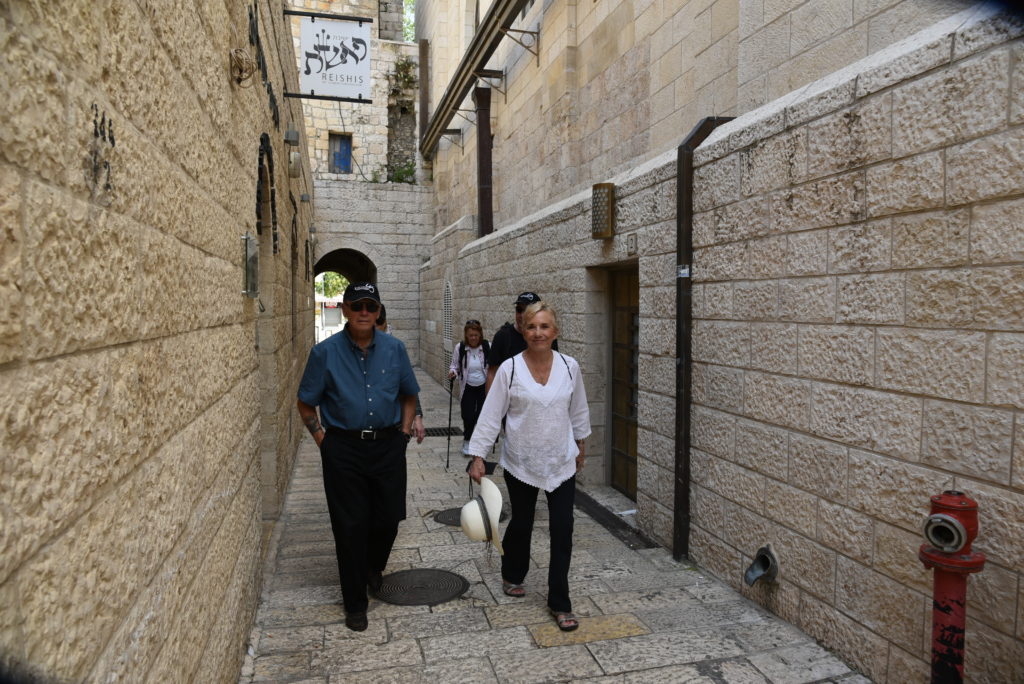 I like being on a cruise ship. I like having people lead me around, tell me everything I ever wanted to know about a place and then having tea with me and my friends in the afternoon. I love beautiful, historic places.

My favorites were the forum as envisioned for us by Jean-Pierre, who is just amazing. As Larry said, you could point to any random building in the old city of Rome, and he could tell you what it was, who the architect was and whether anything happened there worth knowing. And his lectures! He has really learned how to keep the attention of an impatient or uncertain audience. It was such fun to see him do his thing!

Fielding conversations are what always brings us back to each other. You just can’t have conversations like that other places. Even in other Universities where there is so much competition and isolation. Everyone brings something to the table that others want to hear. Going somewhere with your friends is a lovely experience. Larry and I do it very rarely. Together, we watched after one another, celebrated small things, shared small disasters, and bought stuff together. How great us that? 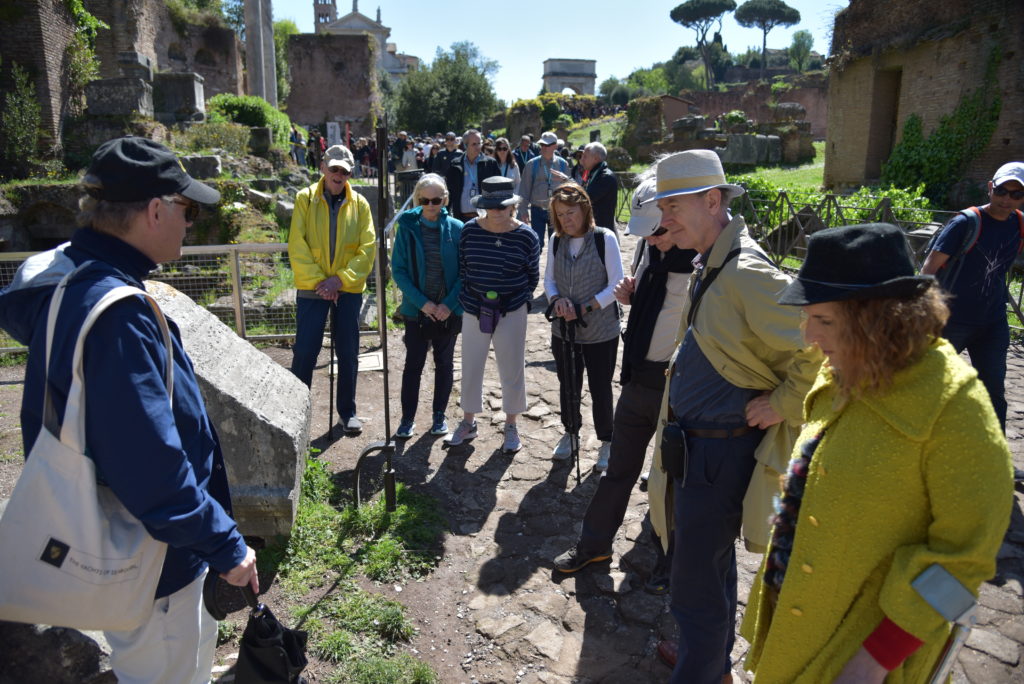 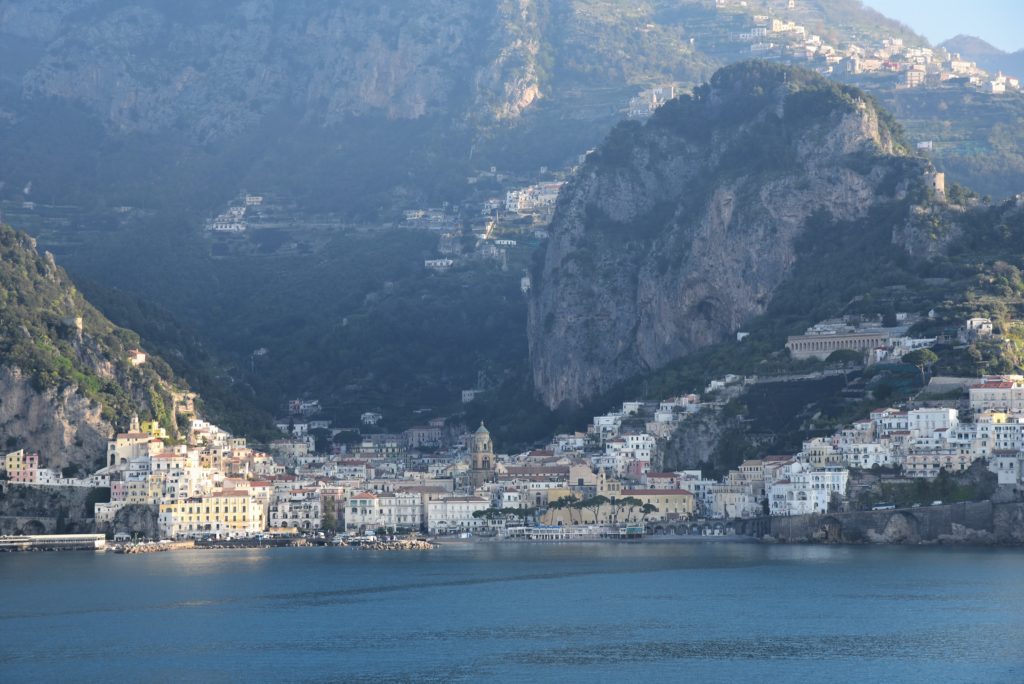 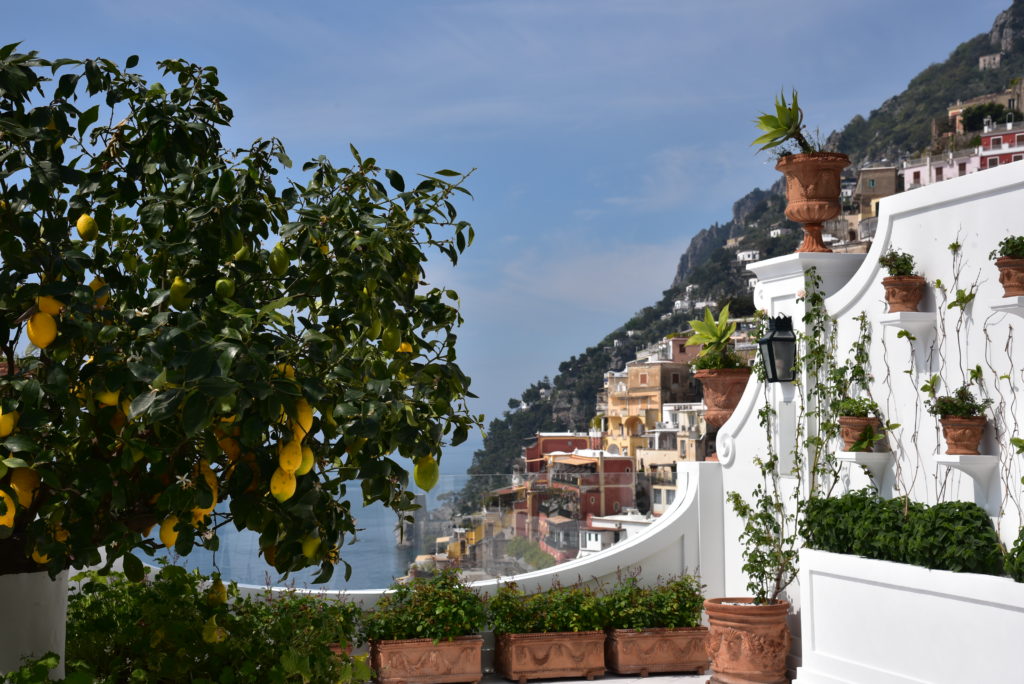 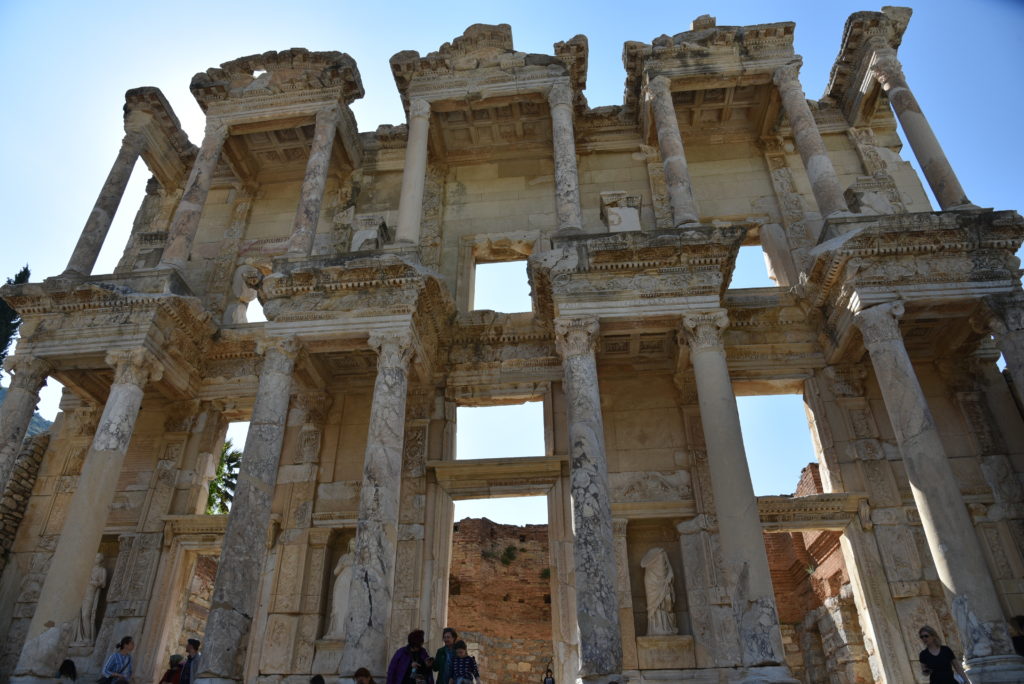 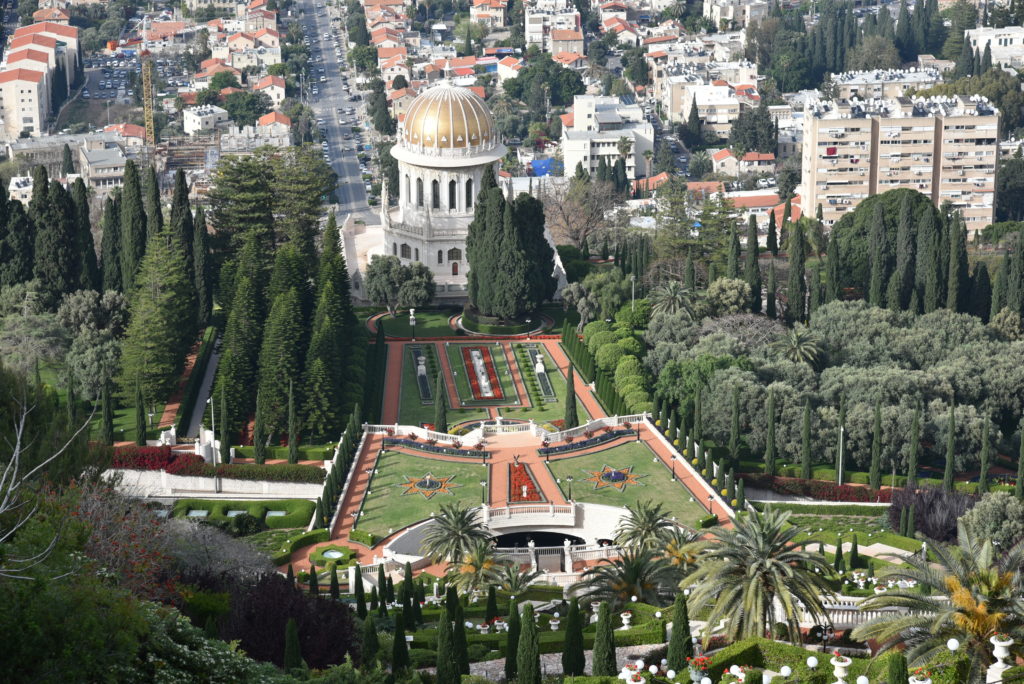