Ed.D. alum has a unique way of sending students to Space Camp

Salsa and margarita mixes designed for astronaut consumption are helping teenagers get to Huntsville, Alabama

Danny Jaques is a space nerd.

It’s a character trait he has embraced since childhood. He’s been fascinated, some would say obsessed, with astronomy and all things space-related since he watched the Mercury-Atlas 9 launch into space on the television with his father, the last of the Mercury crewed space missions. 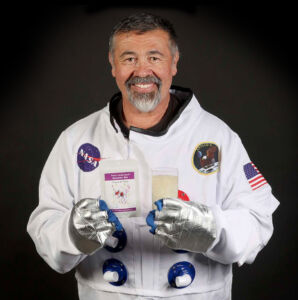 “I was that little kid back in 1963 asking my dad to get me up and watch the launch on black and white TV,” Jaques said, “I wanted to be an astronaut, but I grew up on a farm in Ignacio. My dad had two strong boys: me and my brother, to work the farm. I knew Johnson Space Center was down there (in Houston), but I didn’t know if I could get there.”

Though Jaques kept his sights set on the stars, he eventually attended Fort Lewis College on a full scholarship, where he earned degrees in three different fields.

“I graduated Fort Lewis with an associate’s in agriculture and a B.S. in biology,” he said. “And I have a doctorate in education, too.” (from Fielding Graduate University, Ed.D. Leadership for Change)

Jaques began teaching science at Ignacio Middle School and was eventually selected to tour the U.S. Space & Rocket Center in Huntsville, Alabama. He was so impressed with the programs, facilities and people, he decided Ignacio students should have the opportunity to visit.

Read the Full Story On the Durango Herald