Reducing inequality and promoting social justice have always been a part of our core values. So when Fielding’s summer session convened outside of Chicago in the days following the shootings by—and then of—police officers, we used it as an opportunity to dig into the issues at hand and explore the role higher education can play in addressing racial and ethnic injustice.

“The intersections and complexities surrounding racial injustice, structural inequality, and economic disparities are the issues of our times,” said President Katrina Rogers, PhD. “Universities must be places where open and constructive dialogue and action take place. 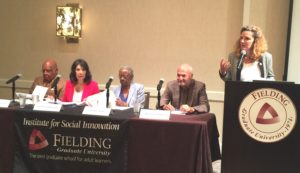 In addition to moments of silence, breakout discussions about race and the drafting of a list of supportive actions that white allies can take, there was an evening panel discussion on “Enhancing Diversity, Inclusion and Cultural Competence in Higher Education.” Sponsored by our Marie Fielder Center for Democracy, Leadership and Education, the panel featured Dr. Janet Helms, director of the Institute for the Study and Promotion of Race and Culture at Boston College, and Dr. Patricia Arredondo, a Fielding Faculty Fellow and past President of the American Counseling Association, American Psychological Association Division 45 Society for the Psychological Study of Culture, Ethnicity and Race.

Both Dr. Helms and Dr. Arredondo acknowledged that race can be an uncomfortable discussion topic—even at the university level.

“Race is the hardest thing for instructors to bring into the classroom because it has implications for personal responsibility,” Dr. Helms said. “If you acknowledge (racial inequality), it means you should be doing something about that. If you talk about it, it tends to bring forth feelings of guilt and helplessness.” 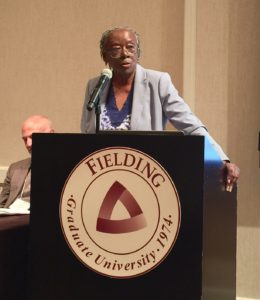 It’s easy for all colleges and universities to say they are opposed to racism, but it’s harder to actively work against it on a daily basis—to walk the walk. “We have these assumptions that because we have a diversity statement in our values, we are about inclusiveness and equity,” Dr. Arredondo said. But if students don’t see it reflected in the actual campus population, it will ring hollow.

“The other thing that universities are doing is waiting for students to get so upset about the issues that they protest,” Dr. Helms added. “It would behoove them to think about how they can be on the forefront rather than waiting for the community to initiate it. Our goal should be to get the conversation and the action going.”

She and Dr. Arredondo did just that, inspiring both students and faculty to share personal stories of feeling frustrated, misunderstood or undervalued throughout their educational careers—both on campuses and off.

“They created a space for many people to be heard and seen,” said faculty member Dr. Anna DiStefano. “They’ve helped people be courageous.”

Dr. Helms commended Fielding for inviting the conversation and digging into the issues.

“You attract terribly bright students who can think about these things on complex levels,” she said. “The fact that a professor opened the conversation and was self-disclosing, I do think it frees students to be more sharing and honest. I heard honesty and authenticity in all comments, whether from professors or students.” 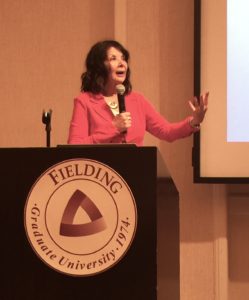 “You have a shared desire to converse,” Dr. Arredondo added. “And that’s an important start.”

One hundred faculty, students, alumni and staff joined an online community conversation a few days later about how the university can best address issues of racial injustice, with suggestions ranging from community meetings to new research and a manifesto. Several new initiatives are already in the works, including a School of Psychology seminar on African American Psychology that will explore racism and discrimination, schooling, kinship and family, racial identity, religion and spirituality, and mental health.

The Marie Fielder Center has pledged to promote continued discussion, advocacy and research on the topic of inclusion and diversity in the months ahead in an effort to advance a more proactive role by both Fielding and the nation’s higher education community in addressing and hopefully mitigating these important issues.

Among the resources suggested throughout these conversations were: