June Rumiko Klein, Ed.D.’10, an award-winning business and civic leader, is Fielding Graduate University’s new vice president and chief financial officer. In the role since April 2022, Klein serves as a key member of President Katrina Rogers’ leadership team and heads Fielding’s Department of Administration and Facilities. She also oversees all financial resources for the University—including treasury responsibilities, insurance, and grants administration. Before she joined Fielding, Klein was vice president for business affairs and CFO at Palo Alto University, positions she held for 20 years. 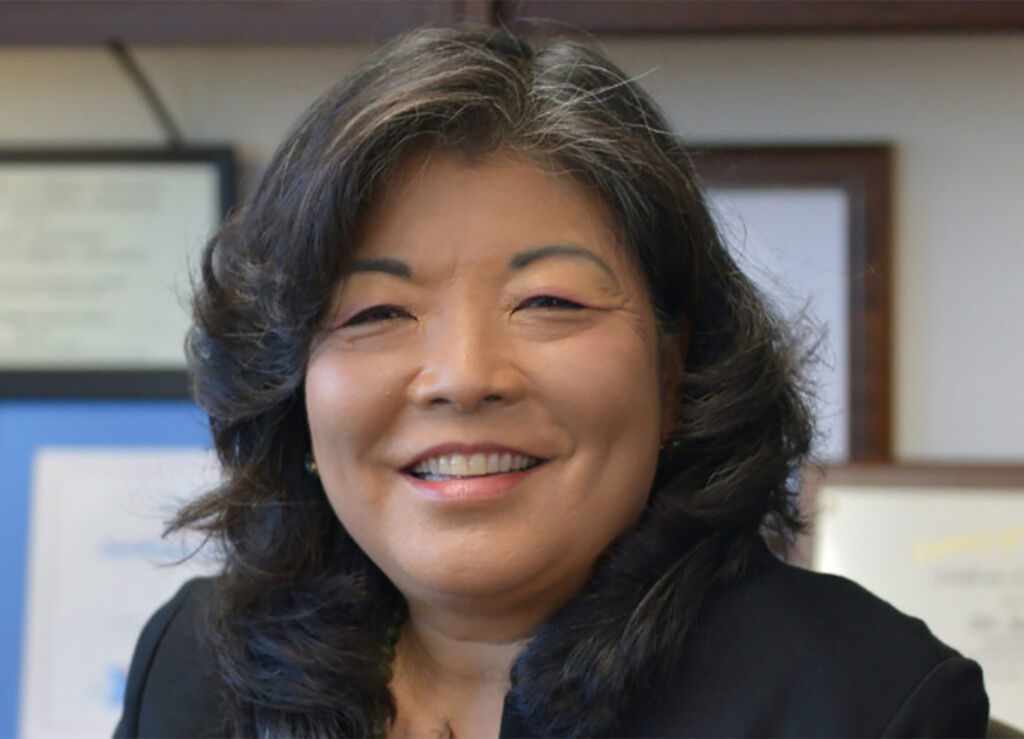 Since stepping into her new position, the former Fielding student and alumni leader says the experience feels like a homecoming.

In Fielding, Klein saw a university aligned with the management of change philosophy she cultivated over nearly three decades as an executive leader in higher education and high technology. Coming to Fielding as an administrator, Klein was also reminded of the University that had provided a thoughtful and ready home for the ideals and practices that have long mattered: “diversity and multicultural and multi-faith dialogue.”

While she was earning a Fielding degree in Educational Leadership and Change with an emphasis in Higher Education Administration, Klein joined what was then the Equity Council, deepening her belief in the importance of collaboration and cooperation to drive social change and make Fielding—and the world—a more just, equitable place. Later, as a Fielding graduate, Klein wanted to stay engaged with the Council and the work that she had begun as a student. When the University launched an Inclusion Council in 2017, Klein eagerly applied and was accepted when the call went out for student and alumni volunteers who wanted to serve—and support Fielding. Since then, she has remained an active member of the Inclusion Council, a consulting group for the University’s president.

“My vision is to help Fielding establish a sustainable and long-term business model,” says Klein. Social justice and collaboration, she adds, are integral to forging that model and forward look. An important first step has already been working with other University leaders on Fielding’s new collaboration with Rowan Global.

“This new partnership represents an important opportunity for Fielding to ensure that the social justice mission it’s stayed true to over the years, will continue” and remain relevant to a growing global community of adult learners, she says. Klein, who’s also an influential philanthropic and community leader in San Francisco Bay area and beyond, knows that to a non-profit, relevancy matters. Achieving it can be a constant climb that includes “understanding the marketplace and what’s important to those who are in it,” Klein adds. But it can be done.

“I’ve been on the board and have served as the chair of the Palo Alto Family YMCA for over 20 years. The reason I was very drawn to working with them is because they’ve been an organization that has remained relevant for almost 200 years. At nearly half a century of delivering distributed learning to a global community of professionals, she sees a lesson in that history for Fielding.

“We [Fielding] can do the same by staying very, very close and in touch with our community, understanding what’s important to them and being willing to respond,” explains Klein who is poised to support that effort. “As the CFO who is also a Fielding alum,” she says, “I understand a lot about what’s important to our students.”

On an ascendant career path spent mostly in the for-profit world, Klein moved successfully between “Big Eight” accounting firms, Fortune 500s, and a string of high-tech startups. But in the late 1990s, Klein says she went in search of “work-life balance,” something many corporations weren’t willing or sure how to help the accomplished and driven female leader just starting a family achieve.

At the time, she recalls, “I was looking for more than just making money. I had two young kids. I wanted more out of life.” That desire that put Klein on an unfamiliar path to non-profit higher education and a life of community service. Starting as a parent volunteer at her daughter’s school led to leadership roles in its PTA. It was because of that immersion that “I learned about inequities in our public schools, and about the amazing kids that prove that education is the great equalizer,” Klein recalls. She also chose to volunteer and support a handful of local civic organizations whose work she admired, including the YMCA, The League of Women Voters, and the Kiwanis Club of Palo Alto. What propelled her then to serve, lead, and fundraise, says Klein, continues today.

Motivated in part by her faith, Klein says, “I volunteer for so many things because I learn a lot and want to see the world through someone else’s eyes. It’s good for my soul. And as a Buddhist, I just want to make the world a better place,” adds Klein whose community service has impacted the lives of thousands of underserved youth and families. Through her work with the California’s Santa Clara Behavioral Health Board, which she chairs, Klein also supports those with severe mental illness. For her, it’s personal.

Growing up, mental illness was little understood and discussed, says Klein who was already out of college and married by the time she learned that generations of her Japanese-American family, including her mother, “suffered with bipolar disorder and severe depression.” Today, she uses her volunteer platforms to help others break the familiar silence and stigma that often shrouds mental illness in families and communities.

“We need to eliminate stigma, we need to get mental health parity,” says Klein. “People talk about their broken arm, high blood pressure, that they’ve had heart bypass surgery, but they will not talk about their mental illness.”

As the former for-profit business leader ventured deeper into the non-profit world, she was also launching an accounting firm. Palo Alto University (then the Pacific Graduate School of Psychology) in Northern California’s Silicon Valley, would become her first non-profit—and ultimately her employer of 20 years. Klein’s work as a CFO has garnered her acclaim. The Silicon Valley Business Journal in December 2015 recognized her with its CFO of the Year Award for non-profits, and, in February 2017, Financial Executives International, Silicon Valley named Klein CFO of the Year for her work at Palo Alto University.

It’s a lengthy list of professional accolades. But looking back, Klein says she “learned to lead” somewhere during “the middle” of a career bookended by non-profit and for-profit work. Influenced by the “Japanese management style,” Klein says she practices what she preaches about the hallmarks of “a good leader.” Things like “understanding the context in which you’re working, don’t make decisions or formulate an opinion until you first understand the root cause” of something and read the research. Another that she emphasizes is, “Ask why. Sometimes you may have to do this five times.”

But Klein says it’s her “passion for social justice and doing the right thing,” that has shaped the “servant leader” that she is.

“I tell people all the time that my job is to help make you successful. I’m not motivated by money or power, hence I’m in a non-profit. So, I look at myself as a servant leader with the goal of helping people and organizations that are trusting me to help them to be successful.”